joshwood commented 1 year ago
Is it christmas?
posted to Share

@EthanCulp Ah yes, I actually have a Bachelors of Science in Santology.

@Mavrick yeah the countdown thing was programmed wrong. I think it's right now.

This is really impressive. How did you do the voice recognition?

@AmeliaBlackwell Haha thanks! Poe is a lot simpler than some of the AIs that make music, though.
If you want to learn how to make something like this, just take a look at my code. Or if you're having trouble understanding it take a look at the StudentBot AI. It works very similarly to this, but doesn't check for syllables/work with topics so it might be a little easier for you to understand.

joshwood commented 2 years ago
Is it christmas?
posted to Share

Yeah, it was wolfram alpha. You can ask it to continue to generate decimals if you want. @TheBlacksmith

@EthanCulp I suppose we could just do this 1457/1461 too lol. But he should def add your digits. It's important for.. uh science or something

@TaylorLiang It's not always December, is it? :P
Nice repl, though - made me laugh.

joshwood commented 9 months ago
What's your most impressive repl?
posted to Ask by katyadee

Mine would definitely be this.
https://repl.it/@joshwood/The-Journey-of-Bella-Shores-5

I don't really understand what to do. But I love the art.

@jarules214 Unfortunately the FPS isn't stable. I usually get ~40 FPS when signed in to hacker and ~20 FPS when not logged in. However, sometimes Repl will get really slow and I get <10 FPS whether I'm signed into hacker or not. Furthermore, Pygame Repls won't necessary stream all the frames to your computer. So even if you are running a high FPS, it may feel much slower due to frame skipping and latency.

I've profiled my code to try to figure out what is causing the FPS. The main problem is the tilemap of 16x16 images. Blitting all the images takes the vast majority of the processing time. To increase my FPS I think I would make the game not scroll so that I wouldn't have to redraw the entire screen each frame. However, I think doing that would make the game a lot less fun. I guess I just hope that the judges have hacker or try running the game locally. It really isn't that graphically intensive of a game, I think it should be able to run smoothly. 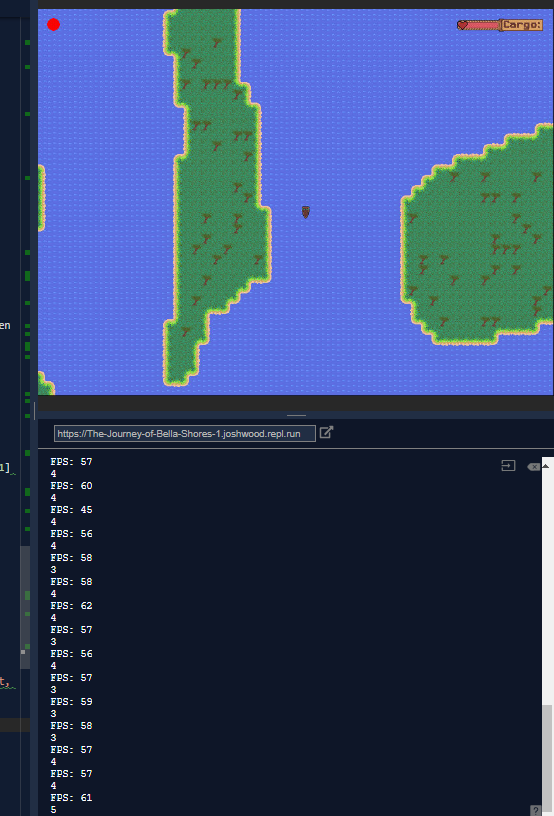 Do you have explorer enabled? If so, disabling it might fix the problem. If you can figure in what situations the bug occurs, report the bug so maybe it can be fixed.

Try adding /home/runner/ to the start of your filepaths. I had a problem loading fonts in pygame and this fixed it.

@ChristianThone Yeah, a dictionary would probably make more sense for this project. It would improve readability.

@NicholasTapkas Haha I appreciate the enthusiasm but the output isn't that high of quality. Maybe you just got lucky and got some good ones on the ones you tried.

I'm not sure if the program even qualifies as a real AI. It just reads the input to find which words most commonly follow other words. It generates each line of poetry based off of the last word by adding a word onto the start of the line that commonly precedes the first word. I did a poor job explaining that. But it's considered a Markov Chain. It also does some extra stuff using the Rhymezone API to make the outputted lines the correct number of syllables and makes them rhyme. Also words that Rhymezone says fits within your topic are used more.

@amasad Do you think there is a maximum number of characters wide that it should be so that it can fit on any screen?

@theangryepicbanana What happened to that?

@Uselessharp_ Lol that's funny. What did you train it with?

@KiKUP Haha thanks for the feedback. Glad you like it 😊.

To make the clean borders I used an alt code table to find the codes for the double lines. Here's a site you could use for that. https://www.alt-codes.net/

Then I made a function that would draw text with lines around it based on a predifined UI width. Take a look at my __printline() function that's part of my UI class. I also made a header and footer function. Feel free to copy my code or modify it if you'd like. Msg me on discord if you need more help. My username is skiboyec#1538.

joshwood commented 2 years ago
First to 21 loses.
posted to Share by gantr833

You should let the AI go first sometimes... just to make it fair. ;)

@themaka Thanks for the feedback! I have to admit I'm not much of a poetry reader, though. I decided to make this program because some friends of mine were making nonsensical sonnets during a Shakespear unit in my English class. I thought I could make a program that could write sonnets as good theirs and it almost can (though that isn't saying much haha).
I named it Poe because I just read The Raven and The Tell-Tale Heart in English recently. I liked the two stories and I knew that Poe is a very well-known poet (although he hasn't written a ton of sonnets from what I've read).

@TimmyTrainer Yeah it looks like repl changed how their filesystem works since I made this. I just fixed it - you can use it now.

joshwood commented 7 months ago
Is it christmas?
posted to Share

lol will you edit it again if I give you more decimals?

Another with 5k+ stars:
https://github.com/awslabs/aws-shell/pull/237

This one's got 5k+ stars:
https://github.com/chubin/wttr.in/pull/381
(I think this one's likely to merge, just it isn't merged yet.)