← Back to all posts
Are Regular Expressions in Test Cases for Class Assignments Working?
JohnDutton (4)

I am trying to use regular expressions in test cases and I am unable to get anything other than literal matching to work. Specifically, I am trying to check the output of:

and I have set the regular expression to each of the following without success:

Is this functionality working and I am missing some documentation?

This has been driving me crazy, too, and I finally figured something out. I've gotten regular expressions to work, but I can't get flags to work.

In a Hello World assignment I got the following regular expressions tests to pass. Expected output is "Hello world!"
\w+
(\w)\s(\w)
\w\s\w
[Hh]ello\s[Ww]orld!

Hey, can you please give us a Repl link so we can help you?
If this is JavaScript, then you need to put a semicolon at the end of the line.
If this is Python, then regexes don't work like that so here's some quick documentation for you. https://docs.python.org/3/library/re.html

@mat1 This is inside of a test case for a class assignment. It seems that the test cases allow for JS inside since it references https://developer.mozilla.org/en-US/docs/Web/JavaScript/Reference/Global_Objects/RegExp in the help. But I've tried every possible permutation of the regular expression to get the test case to work with no luck.

Edit: To clarify, I can't provide a Repl link because it's not on a project, it's about a feature of Repl itself.

@JohnDutton Did you ever receive a reply or do you have any idea how to fix, as I can't get it working either (and the 'example' they give doesn't work).

@n_frost I have received neither. Good to know I'm not the only one!

How did this get marked as an answer? It doesn't address the question at all, let alone answer it.

I just ran into this problem while setting up my AP CS A class and it made me feel dumb. 🙁

One way to make regex work properly is to explicitly mark the start ^ and end $ of the string your pattern is to match.

The example is me figuring out how to test Exercise 2 from Chapter 1 of Think Java 2e by Allen Downey.

Regular expressions don't work properly (or not at all). I've tried several variations, with/without start/end "/" markers as well as lots of others...all based on Mozilla ECMA regex, as referenced in your documentation.

I have noticed that if I put incorrect regex (i.e. invalid), the system will hang when running the test. So, it looks like it's running SOME kind of regex algo...but it's just very poorly implemented/documented.

Please fix this as it is a vital part of your platform for us instructors.

I've taken most of regex out, and will likely delete the specific test so it doesn't cause a failure for my students...but here's the link so that an admin can look at the assignment and run a test regex.

You can see, however, in the image below that it is treating the regex characters as literals...at least in how it's displaying output: 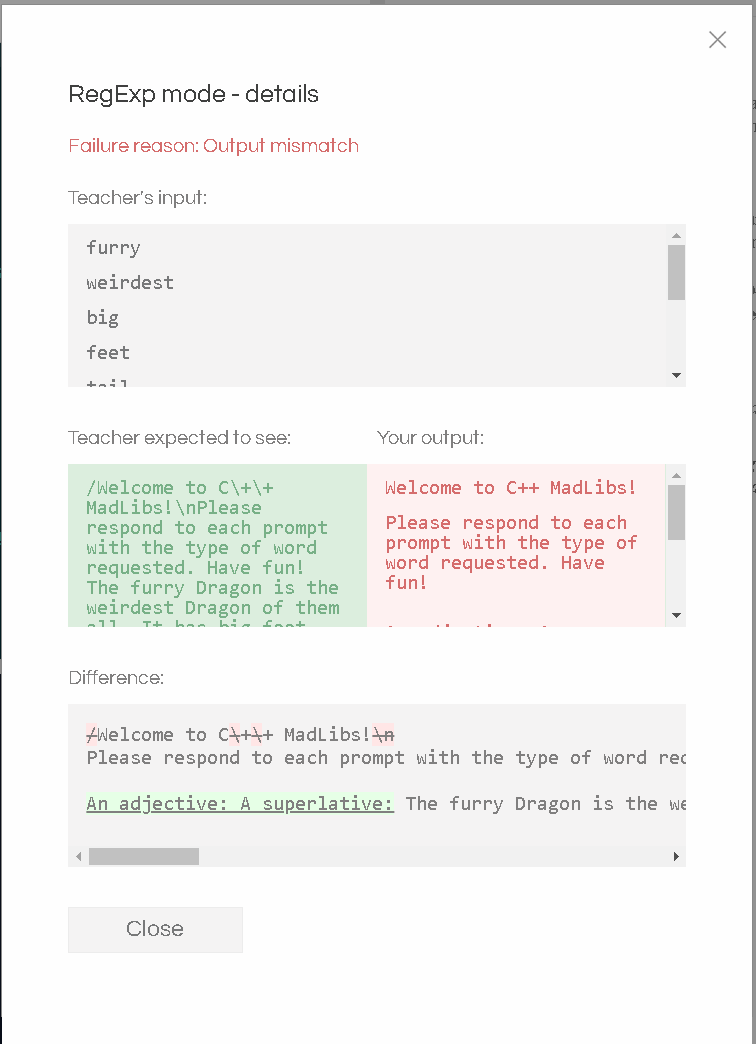 I'm seeing the exact same thing. What works is only what @daveavis wrote below. I can't get flags to work