← Back to all posts
Help With this idea
AaronPhilip (2)

I want to make a One-time Password Generator in java. i have the idea and most of the code i just need help with a few parts of the program.
Anyone with an interest and experience in Java pls hmu in the comments. 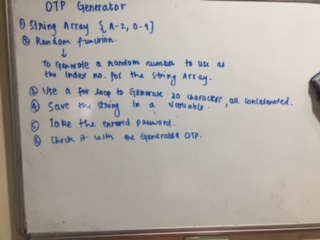 If it didn't work then, Comment me below!
Thanks!

Hope this helps
Please mark my answer if this helps

@PattanAhmed Thank you for this answer it really helped a lot. I had completely ignored the fact that we can use character extraction!! Thank you for your time

@AaronPhilip Welcome!
Glad to help
Any more questions are most welcome!

@PattanAhmed You know, it’s not really helpful to just give people the solution.

@CodeLongAndPros Hi!
But, I also provided him with the reference link so that he may understand the concepts very well before writing that code
Thanks!

@PattanAhmed This is blatant spoonfeeding

@HahaYes @CodeLongAndPros Sadly, there's nothing I can do about this, except tell him to not do that.
@PattanAhmed Please don't "spoonfeed" or give direct answers to questions. Always give them a small bit of example code so they can learn how things work rather than copy+pasting it into their repls.

@Vandesm14 Taking a better look, it's not that bad. But my point still stands.

@Vandesm14 I will be more careful next time!
Thanks for your advice!

Sounds simple enough, but may I recommend using a single string to store the characters instead?

@SixBeeps
That is a very good idea! But my issue is that i cannot hod the randomly generated String in a Variable. Let me add my Repl and please go through it when you have the time.

@AaronPhilip You can, say the alphanum variable is declared as such:

You can get the N'th character by saying:

Also, I see that you aren't really storing the final string in the store variable, I'd recommend appending the new random letter to it: