You need a diagram to picture the soundness of your system

Let me start with meme-like

conversation between me and @brucou 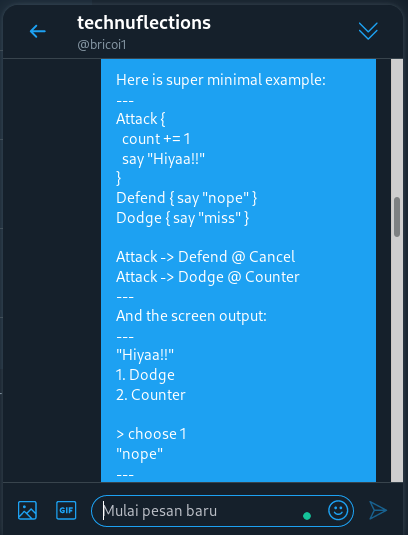 The plan for this jam is to make the scope as minimal as possible and provide a real usage demo.
However...

This is what we get 😂 (sorry @brucou)

This language is a rewrite (and also redesign) of my previous prototype called Scdlang. It starts from my curiosity on how to define state machine in Rust which I'm new to that language back then (more info). As I experiment, the design of the language grow and I found a lot of interesting tools for the state machine. However, I can't find a language that similar to drawing-language like Graphviz or Mermaid but has semantics analysis and can generate code or be embedded in another programming language.

I've been discussing the design in the past with @brucou (see issue #29) but then I just realize that the design of this language become too wild and Rust macro is too slow. So I took this chance to rewrite it from scratch with a different approach.

Ah yes, he is the author of Kingly which is another state-machine Javascript library that has nice integration with several visualization tools. I highly recommend checking the docs.

Logic State share the same philosophy with Scdlang, which is:

This can be achieved by utilizing symbols (and ligature-symbol) to mimic the diagram. However, the symbol should be meaningful. Let me take an example from smcat language:

just write it as

The thing that needs to be considered is not having too many symbols in one-line.

My rule thumbs for this are:

This part can be divided into 2:

Conciseness can be achieved by having syntactic sugar. For example:

As for refactorability, the language might have a module/import system (not decided) and hierarchical states (#29) in the future. However, this will not happen in a short time to keep the scope of this project as small as possible so it can be embedded in another programming language. Maybe there are better alternatives 🤔

This is the trickiest part. Let's try to relate state-machine between its use cases and the programming languages it commonly used:

Hmm, but that doesn't answer anything 🤔

Now relate them how state machine are implemented (mostly):

However, Logic State is a domain-specific language and there are several ways how DSLs are used:

To make state machine language that can last in the long term, we need to support all those scenarios. That sound impossible but we can chip it down gradually as long as we use the right approach 😉

There is 2 aspect of how we can design this language:

And due to that complexity, we need to design Logic State as embeddable DSL first. Compiler for generating code can be implemented in any language whatever it uses VM or not. However, to make it compile at runtime is a different matter. We need to approach it on how PCRE (regex) or Rosie does. In short, we also need to package it as a static library, dynamic (shared) library, and webassembly module. This means the most suitable language for writing the compiler is: C/C++, Rust, Nim, or anything that can do manual memory management or have a very slim garbage collector.

Making 2 separate compilers is also an option. Where one is for generating code and the other is to be used at runtime. However, maintaining 2 implementations without a single source of truth can be quite difficult. And so there is 3 way we can approach this:

In conclusion, Nim should be used to write the compiler because it brings these benefits:

A bit out of topic but I've been participating in various game jams this past month here and learn a lot from another. So I've been thinking that I need an outlet to experiment and grow this language in a fun way. The game that I make mostly is vehicular combat (though I prefer to call it car battle) and I'm thinking to integrate this language where the player must constantly write a state machine to control the vehicle and defeat the enemy. So that even if I can't develop this language in fulltime, I can still develop it for my entertainment since using it in production might be too risky and can put people off.

P.S: it takes some time to Run ▶ the demo (examples/detective.logic) because it also needs to compile the source first (approx 5-15 seconds)

@Vandesm14 thank you. This is the first time I use Nim in a project 🤠