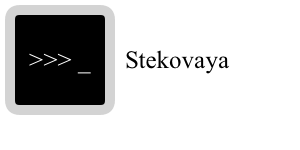 Stekovaya is a stack based language. It is very light weight but also very versatile.

Congratulations! You've made a major step in understanding Stekovaya.
In this simple example, we've added a string (Hello World) and terminated with END. We've also popped it off of the stack and printed it to the console using MSG.

Let's make our example easier to read by adding some comments. REM is a key word reserved for adding comments.

If REM is a hard keyword to memorize for comments, think of it like REMembering something to write down.

We can also work with numbers. Simply typing numbers will push them to the stack.

Booleans are basically true or false. In Stekovaya, a true is a 1 and a false is a 0. We'll review this concept more when we look at comparison operators.

Variables are an easy way to store values. There are two types of variables in Stekovaya: constant and changeable. Both variable types can be declared with DEF.
Let's start with a changeable variable. As the name suggests, the values of these variables can be changed.

What are we doing here? First we define an identifier called "message", which is terminated with END. We assign "message" a value of "Hello World" in a similar fashion, ending it with DEF. We can use this variable later on like so:

Stekovaya does not use the common operators you might expect, as it revolves around a purely stack based programming language. Let's start by learning how to perform simple math.
We can add, subtract, multiply, and divide fairly inuitively using ADD, SUB, MUL, and DIV.

In this example, we simply add the two numbers at the top of the stack and log it to the console. As mentioned earlier, the rest can be done in the same way.
For clarity:

We can also calculate other mathematical operations with some useful functions. The first is POW, which raises the second value of the stack to the first stack power.

We are effectively raising 2 to the 5th power (2 ^ 5). Like POW, we can also take roots of values using ROT. This is also the same as taking a value to the 1/n (where n is a real number).

In other programming languages, you might expect to see > or <=. Stekovaya uses key words to perform similar actions.

LSS is used as the less than comparison operator. In order to log the result, we use MSG. The others are fairly self explanatory, so let's go over them quickly.

Remember, 0 is false and 1 is true. To log the results of comparisons, you can use MSG or DMSG

There is only one kind of loop in Stekovaya, the FOR loop. Initializing a loop is easy. Simple start a loop with FOR and end it with EFOR For instance, the example below infinitely logs "Hello World!" to the stack.

In order to terminate or break from a loop, you must use BRK.

While it seems like useless filler, you can also choose not to do anything with the stack.

Thanks @AdCharity for write markdown!

6 months ago
You are viewing a single comment. View All
TheForArkLD (745)