How To Make a Tensor Class

A couple weeks ago, I thought about numpy arrays and wondered how they worked. Numpy arrays are basically tensors, which is what this whole post is about. I couldn't find any online resources explaining how to make a tensor class from scratch, so I tried to make my own in Python. 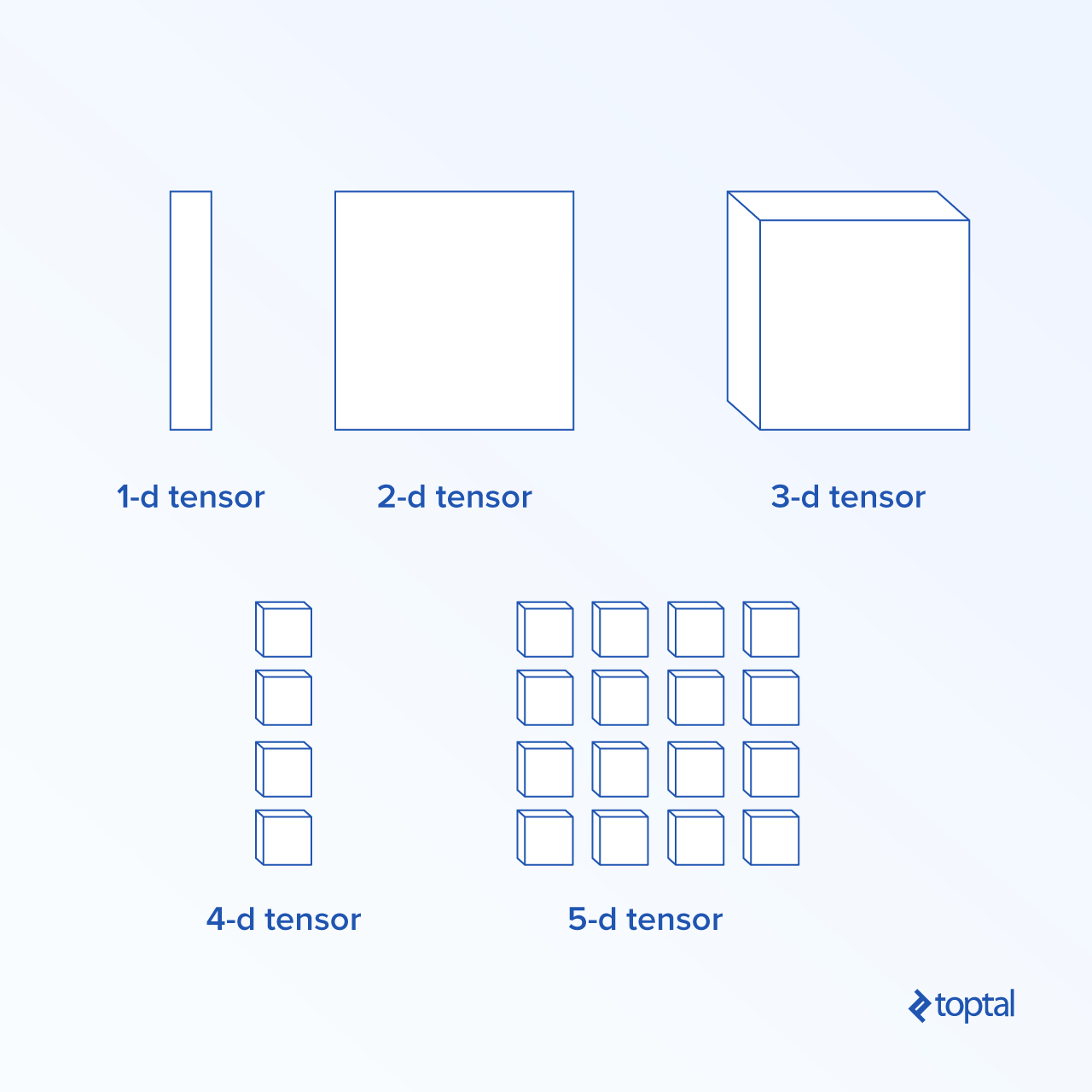 Notice how, when a 4D cube can't be drawn, a list of 3D cubes is drawn. This is the same principle I used when making my tensor class: Simplify larger-dimensional tensors into lists of smaller-dimensional ones.

What We Can Do With Tensors

Setting Up The Tensor Class

The tensor class will take in an array, like numpy.array.
To start off, we need to process the array. To simplify tensors as much as possible, the tensor will be represented as a list of tensors or 1D arrays. This means that every tensor will always look like a 1-dimensional tensor, which makes writing code easier.
Here's how I wrote the function to process the incoming array:

This turns all arrays into tensors of their own, which makes every tensor just a list, or vector, of either other tensors or numbers.

An important aspect of a tensor is its dimensions. For a numpy array, this would be arr.shape.
For a tensor, we can assume that all tensors in our array of tensors have the same shape. This makes getting the dimensions fairly easy. Just loop through the first elements of each contained tensor and find the length of that tensor’s array.

With those two functions defined, we can finally define the init function of our Tensor class:

To turn the tensor into an array, we need to do the opposite of the process function: turn all tensors back into arrays. To do this, we loop through all elements in the tensor and add a list if that element is a tensor or the number if the element is a number.

If however, we want to make it a vector,, we can just loop through all the numbers and add them to a list.

Instead of defining your own array, it's nice to have the option to create a blank tensor. For convenience, this will be split into three parts: one function that computes the product of all numbers in an array, one part that packages a 1D array into a tensor with all the dimensions we want, and one part that creates a 1D array of numbers.

The product function is the easiest. It just multiplies all the elements in a list.

Next comes the packaging function.

This function isn't as self explanatory.
The function takes in a 1D array and splits it into parts of a calculated size.
First, the 1D array is split into groups. If the dimensions will be [2, 3, 4], then the array passed in will be split into 2 arrays of length 3*4. These two arrays will be the two tensors in self.__arr. Recursion is then used to package the two new arrays. When a 0-dimensional tensor (one number) is made, the number is returned since it can't be split any further.

Lastly, the blank tensor. In this case, it'll be full of zeros. It creates a 1D array of zeros and packages it.

Transposing a tensor is the same as changing indices. Down becomes right and right becomes down. You might know this from matrices, where the transpose of a matrix means that the width and height (m and n) are swapped.

When thinking abstractly, though, things get a bit tougher. When there are more than just two dimensions, you can order things in more than two ways. The default transposition is just reversing dimensions. A tensor with dimensions [2, 3, 4] will have dimensions [4, 3, 2]. But, in case you don't want to reverse it, you can also choose the new ordering of dimensions. This is the same as numpy.transpose(arr, order).

This is quite a long function, so I split it into four groups to better explain what's going on.
Group 1 means that, if the tensor is a vector, return it. This is because a vector can't be transposed. It only has one dimension. As an example, [2, 3, 4] can only map to [2, 3, 4].

Group 3 starts by defining the path of the element we're trying to access. That way, we can access the element in the current tensor and reorder its path to place it in its corresponding spot in the new tensor. Because we can't assume how many dimensions the tensor has, we need to create a reference (the variables ref and place) and loop down to each number with a while loop. The path is then looped through to update the reference to the original tensor (ref) and update the reference to the new tensor (arr). For referencing the new tensor, the order array defines the spot in the path that needs to be referenced, which is why to reference the new array place = place[paths[order[i]]] is done.

Group 4 updates the path. It increments the last number by 1, and then checks down the line to make sure there are no overflows.

The while loop runs until all possible combinations have been referenced, which is indicated by the first number in the path being equal to the number of elements the tensor should contain, so paths[0] is compared to self.dimensions[0]

By overloading the + operator, an added scalar will be added to all numbers of a given tensor.
Subtraction, multiplication, and division are all done in the same way, but with the operator changed from + to - (__sub__), /(__truediv__), or *(__mul__).
However, subtracting a number is the same as adding a negative number. So, we can shorten the __sub__ method to just:

In the subtraction function I just showed, I assumed that a tensor could be negated. To negate everything, we can just multiply all values by -1.

This just extends the second tensor to the first. If the dimensions don’t match, the function will return None by default.

Last one! It also happens to be one of the most complex functions in this.
Matrix multiplication works by multiplying the rows of one 2d tensor by the columns of another.

Numpy uses broadcasting to do multiply tensors with more than two dimensions -- I won’t get into that but just know that those tensors are treated as a stack of matrices.

Four rules requires four functions. While nested functions are NOT the most efficient way to go, it made it simple to package the function into one thing.
The first two functions are pretty straightforward. The main operation is matrix multiplication, so whenever one tensor is a vector, turn it into a matrix. If the first tensor is a vector, make it a row vector, and if the second tensor is a vector, make it a column vector.
The matrices() function does standard matrix multiplication, as referenced above. Go through each row in the first matrix and each column in the second and sum the products of corresponding points in each row and column to get each point.
The last function (nd, stands for n-dimensional) takes in two tensors where at least one has an order greater than 2. If the first tensor has more than 2 dimensions, multiply each tensor in that by the second tensor. If the second tensor has more than two dimensions, multiply the first tensor by each tensor inside the second tensor. This means that each tensor (with more than 2 dimensions) will be treated as a stack of matrices, being multiplied by a vector, tensor, or another stack of matrices.

And there we go! For everyone who read all that, you should earn a medal. That was a lot of words.

Physics defines a tensor as something that transforms like a tensor

Just a coding style comment: in python the convention is not camelCase function names, but instead snake_case functions names.

@a5rocks thanks for the reminder...I’ve been programming more in Java/JS recently and I forgot about that when I was writing the code

I get it. Thanks! @EthanHorowitz

@EthanHorowitz thanks for this overview. Tensors seem a little less intimidating now!

thank you for your immense kindness.