Make your own animation - Tutorial!

🐍 A step by step tutorial on making a python animation 🐍

NOTE: If you haven't already, try visiting here for more info on Python

This tutorial is all about making your first or your non-first animation. Basically, this tutorial is about animating in python. [pogchamp] This was a sudden idea, so some details might be left out. [thonk]

The basics of an animation that you should remember are the following:

Remember the following, and you'll be just fine

The only modules you need for animation making are the following:

So far, you will have the following code:

TIP: If you press the button on the top right corner, it will automatically copy it for you!

Both code has correct syntax. However, the thing with python (and many other langs) is that you can import certain librarys from a module. Like this:

In this case, it would import the library sleep, from the module time. So any three of those would work. Let's move on now!

2.2) The Basics/The Easy way or the Hard way

There are multiple ways to actually code animations. But in this tutorial, we'll talk about 2 ways:

So let me start with the file animation.

So the way filing animation works is that it uses files. Say you wanted to name a file poggers. Then just click the file button:

However, to store it evenly and organized, click the folder button:

So far, you should have a folder and a file (which it is in the folder) The folder and file should also be named; I would suggest:

NOTE: You'll always have one folder, unless your animation has a series of animations looped together(we're not talking about that this tutorial)

Decide on what kind of animation you're going to make. I suggest making something easy, as it takes pretty long to code the ASCII ART. (This animation you're making in the file is ASCII ART. Click here) Some common examples you might want to try are:

I'll choose an example from there and lets say I choose 'Snow'. So then, I would make a test file.

NOTE: So far you should have 2 files and one folder

So there are 2 ways you can make the file, since you made the folder.

So far, we've kinda done the basics, making the file and folder. Now, we do the ASCII code. I can't really explain much about it because this is about your creativity. However, I'll try to explain my best.

I can't explain much about this part of the tutorial. This is really up to your thinking and creativity. I did say I would try my best though, so lets get right into it. [poggers]

So think about your animation plan for a sec. What kind of ASCII character are you going to use?* What will be the scene? Will there be characters? ...

Think about those questions and answer them (in your mind, not to me ;)). If you can, your animation is probably possible! If not, try again to think a new idea. This was, however not really talking about ASCII art. So I'll show you a few examples and go on ot the next subject.

NOTE: Remember, these were made in a regular file, not a .py file.

NOTE: I have not included ALL the files, only some of them. You will have to create the other files.

Note: Some of these animations you can also do in python. However, I will talk about this in the next subject.

So. That is a lot. lol. Anyway, if any of you guys are stuck, please notify me in the comments!

This time, we're gonna focus on making an animation in main.py (in python). Like in the header above, the whole animation is gonna be printing ON AND ON. Which will be annoying. But who cares?!? [haha.]

Let me talk about the basics of printing animations. You know every one of those files that you usually make in the files? Everytime you print something, it's one file. It sounds ok, right? Well, its not. Ok, sry for the , but I had to add some humor. I think. [thonk]

I'll talk about the torture for a sec. Do you remember when I said that when you dont do 2 \'s, it creates some kind of blob? Yeah, that's the torture. If you don't do it, the indentation becomes a mess and becomes hard to deal with. Really.

I know i'm blabing on and on, but I have a point (kinda). I'm telling you guys to use the Filing animation. The indentation, symbols, everything is easier to deal with. However, as I made this tutorial, I'll tell you guys how to do it.

NOTE: If you haven't already looked at the header '2.211) The Basics/The Easy way or the Hard way/Filing/ASCII ART', you might as well do so.

The ASCII art for the print will be relatively similar to the Filing ASCII art. The only difference is that in print*'s, there are some indentation rules to follow.

*I know i'm saying this over and over, but what else can I say?

This is the problem. If you don't add the extra \'s, you'll end up with a problem. I'm just reminding you to add the double \. [yep]

^Yep, I said rules before, but its rule now. [yep]

Once you finished the part above, go to the main.py (otherwise another python file). If you look at the code, it will have this so far:

You might have something similar to this, that's ok. As long as it's following these guidelines, you'll be fine.

Now we need to make the real part, the animating. As I said before though, we need screen clearing and time sleeping. To do that, we need small details and functions... [wha?]

What are these small details? Well, this could mean;

This pretty much covers all what we need. As we've listed it, lets get coding!

NOTE:We use the os module to cover this section.

So one of the most common things I do and most other python coders do is import the os module. We(py coders) usually use it for clearing the console. The syntax is: os.system('clear'). However, because writing it may be painful [lazy], we make it a function! We do this:

NOTE: Just to make sure, you can call the function whatever you want. ;)

Because that this is a function, it can be called any amount of times. Now that we're done with that, lets move on!

There isn't much to include in this section, I will just attach a copy and paste of the colors. You can either paste this into the main.py or a different .py file. Here it is:

The capatilzed colors are darker, while the lowercase are a bit lighter. The back is a thing that will be behind the text. The bright is as it is said, bright colors. Also, the rest that I haven't mentioned are other editing things. For example, underline underlines and reset resets everything. And we're done with this section!

NOTE: In this topic I will be talking about how to use this function.

So the time.sleep() is very important in animations. It makes the animation actually rest, instead of going at the speed of light and you not being able to see. You have to put it in between file openings and before printing another 'file'. I will talk more about this in later sections.

The middle of the animation is the main code. This is where we will talk about opening up the files and printing your 'files'. So lets go to opening up files!

Opening up your file is how the animation 'animates'. It is the following syntax:

So you've got the basics for file opening! Nice job! To continue on to more to the animation, keep adding for loops. I will be putting an example in this repl. Let's continue on to the print way!

So printing animations are actually simple (without the animation). The following syntax is correct (and an example):

The output would be:

NOTE: The Reason why I added two backslashes was because regularly it is an escape slash in python. Also, the reason why the second backslash disappears in the output is that it now knows that we're trying to make it a symbol, so it switches it to a regular backslash.

So say you making someone go on the internet typing something in. You could add seperate print statements printing each and every other one. So there you have it! Let's move on! [pogchamp]

NOTE: Remember that my code WILL be different than yours, mine will just reference yours
ANOTHER NOTE: My code will only show the main.py, so look through my files for those.

Again, if you followed correctly, you have done it! YAY! Congrats! Wait a sec though...

Hey guys, thanks for viewing this tutorial so much! I hope you guys like it, give suggestions, feedback!

LAST NOTE OF TUTORIAL: Please don't ask for editing access, it annoys me, and you can just fork the repl. That would help both me and you, because you wouldn't have to wait so long for my permission. Thanks a lot again! ✌☮ @JBYT27

That's marvelous! Also, there were colors in Python? Didn't know that.

Thanks! yep! Glad you learned something! @ShAdOwZxd

great! I learned a lot :D

Nice tutorial and your animation is cool!!!

Stop-motion animation is my favorite! Wait would this be stop-motion or text art...

Remember to add time.sleep()'s every so often.

I would say from time import sleep then you can use sleep(), it's shorter and easier.

maybe explain the code, like you could say what does open do, then readlines, etc. 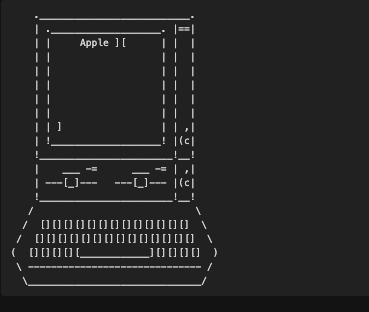 I prefer like # colors, a space just looks nice.

and why 2 back slashes, when only 1 appears:

I know it's because \ is for escaping, but maybe precise it?

Thanks for suggestions! So

i mean like if you compare those 2 images, the side of the computer is made like this: \\ but in the second image, you only see \. That's because of the \ for escaping, but others might not know that?

Thanks btw for commenting on both tutorials! @Bookie0

You have to be on apple device
grimace @zplusfour

Wow that Is cool and amazing! Also, Just a question wouldn't Ice also be good?

It’s so cool
Thx it helped a lot

This is really neat.

@JBYT27 Wow I learned a lot of things just from your tutorial!

@JBloves27 I followed your tutorial but this was the result.
https://repl.it/@Brendan23/animation-1#Frames/frame1
how do I fix it or what did I do wrong?

try putting a os.system('clear') after the time.sleep() at the bottom @Brendan23

@JBloves27 its still the same output.

@Brendan23 also, I change it to snow.

That should work. Try that

@JBloves27 it's unfortunate but it still doesn't work. 😥

@Brendan23 do I have to make 9 or more files or something. seems like your "animations" are always 9 files long.

oh. hmmm... could you share it with me so I can experiment? @Brendan23

no, thats prob not it. Then it would make an error @Brendan23

Cool. Interesting that you choose to focus on emojis! Still, anything that makes us improve is good, huh? Best to you!

@JBYT27 How about making some people in the animation?