← Back to all posts
Dragon Eye RPG
PixelBitez (177)

This is an RPG made for the AI competition. The game is intelligent by generating a story and determining enemy moves.

Dragon Eye is a terminal based RPG. It may not be a AAA game, but it does have one special thing about it. Since there is no story, the game is generated by an AI based on decisions you have made. 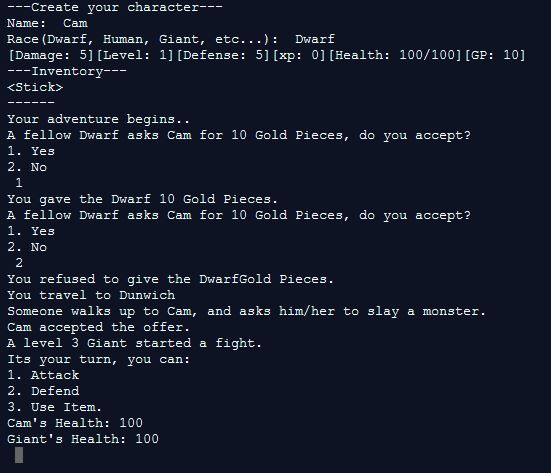 You can fight a variety of enemy's in the game. Before combat the game generates your enemy to be close to your level and damage, that way every fight is fair, and a decent challenge.

Items are essential to playing Dragon Eye, without them you would most likely be on a death loop.

The gameplay is based on strategically making decisions. You always have 3 options in combat, attack, defend, and use item. Using an item will heal you with an item, defend will use your defense to counter the enemies next attack, and attacking will use your attack and subtract that from the enemies health.

Seriously, am I missing something here? There's no AI at all, there's no tracking of user decisions. It just randomly does something each turn of the game...

@nathanburgess owchie, it may not be the best "ai" in the competition but reading over the competition page, it follows all rules. it shows some form of intelligence, enemies defend themselves when needed, characters can ask you for money, etc.. so it may not be sophisticated but its within the rules. i am working on a new version of this game with complete ai for enemies and a story driven by decisions, so if you want to see that instead of this.

@ebest yeh u better not lose to him

@PixelBitez Won. It did not give me health though...

Hey can you make it that when you choose an item, that you dont have to type in capital letters for ex. you just type in “stick” instead of “Stick” it would make it easier for people I would think.

@NarenR im actually working on a extended version of this with a lot more, and i took your feedback so that will be in it, i might finish in a week or so.

@PixelBitez Very nice. Overall it works really well. It's just the UI that needs a little work. But nice job!

@Sparkster or he can just put .lower() so that either way it is recieved as "stick" which can be the correct answer

its very
good but needs a toootorial

did anybody else catch this?

Unrelated question: How do you generate random numbers?

@LOLLOL3 dang u broke, pay me your debt in gold

When monsters are low on health they can regenerate some health back every turn?

@mkhoi yeh they do sometimes

FYI - someone has taken this game and posted it saying it is theirs https://repl.it/talk/challenge/Loa-RPG-WIP/10637
i ma absolutley DISGUSTED

WOW! AMAZING! I made a hacked version with the stick called "DB" it has 1000 Damage.
Here is the link to it if you wanna play it: https://repl.it/@ChristianThone/Dragon-Eye-RPG-HACKED

Why people always tryna hustle me for my money?

@CharlesPreising the world is cruel

It has some lack of info, but overall it is a very good attempt. Noice!

at the first battle how do i attack?

@skull_is_dull You have to type the number of the action, so in order to attack you type "1". Then it will ask what to attack with, type in "Stick" as it is the starting item in your inventory.

@PixelBitez Although there is the problem if you type Attack instead of 1 your turn is skipped. Also, typing stick instead of Stick is also invalid.

@EatTofuEveryDay @PixelBitez You can easily fix this by using the .lower() function on your inputted variable, and the code will no longer be cap sensitive.

@PixelBitez Sure thing! I'm anxious to see what more you can do with this! :)

Why can you heal with a sword?

This game isn't fun. the first enemy you versus is too strong and you can't kill it in time. also, I couldn't access any weapons when I tried to attack.

Very broken, i almost can't understand what it's telling me...

Cool Game i see you put a lot of thought into it, Gives me motivation to make my own RPG games

recommend adding emoticons like this (' . ') to make it more funny and cool to look at than just text you have to read

nope healed 6 with a Knife

I'm so stupid and can't figure out how to use an item because the directions are unclear as to how that is done. Please help me.

@PixelBitez It still doesn't work, Then I looked at another comment that you gave to someone and I figured out that I had to do 1 then Stick

Are you submitting this to the Game Jam?

@KatyaDelaney im actually working on a separate game that renders visuals in a terminal / console based on highlighting the text, i don't want to ruin the surprise of what its going to be about though

I'm making a similar game with c++. Instead of typing out the name of the item, I made it so that I enter the number of the place holder in the inventory. For example, instead of typing "Stick", I enter '1'. If you want to know how, you can simply make an array for your inventory variable and use conditional statements that accept numbers as input.