After testing this game 100 times to make sure it's fair, I present to you: Among us ALPHA!

This is Among Us ALPHA, which is based on the game Among Us. You are in a ship, and there are other humans beside you. Some humans are imposters, and some are crewmates. The imposters goal is to kill all the crewmates, and the crewmates goal is to complete all the tasks.

TESTING - Started the game
ALPHA - Made rooms and more fixes

In the ALPHA update, I implemented rooms, so you can now go into different rooms. The map is based on The Skeld, but I got rid of some rooms that I didn't need for this update. I also added a few more tasks, and fixed the bug where you could go into the negatives.

I also made the bots smarter, in the way that if you kill someone and some other bot sees you, your suspicion level will go up, which will effect how often the bots will vote for you in a meeting.

The BETA update will probably be the last testing update, where the game stays in the terminal. I'm going to add the ability to sabotage and the ability to observe. After this update is released, you probably won't here from me much, but I will be posting some of the work I have done, in preparation for the graphics update (note that this is still terminal graphics)

None yet, so please comment below if you find something interesting!

Here are some common questions that one might ask.

What Do I Plan To Add?

I'll be going in detail for the updates I plan to add.

I'm thinking on how I should add more tasks. It would be very nice if you guys could give me some tasks that I could possibly use.

For the voting system, I'm planning to had a chat with bots. You can chat with the bots, and the bots might respond to you. Based on what bots type, it will influence the choice of who the bots will vote for. For example, a possible conversation could be (sus means suspicious)

Sabotage will be implemented soon. For now, the only sabotage I know is sabatoging the lights, so I'm thinking when the lights are sabotaged, you cannot move do anything except wait for the instructions to somehow fix the lights. Please comment on what other types of sabotage I could implement!

Graphics will be implemented as terminal graphics. :)

Halp, the terminal just freezes! Is this a bug?

No, this is not a bug. It is related to your internet connection. Rerun, reload, reconnect to internet, and if those steps don't work, ... I don't know how to help.

Thanks to Coder100, fuzzyastrocat, heyimmarcus, and InvisibleMan for responding to my questions in repl.it ask. I really appreciate their efforts to look through the questions on repl.it ask and answer them.

If you want a glimpse of how the game without running it, here is it! You can also find some of the strategy here. 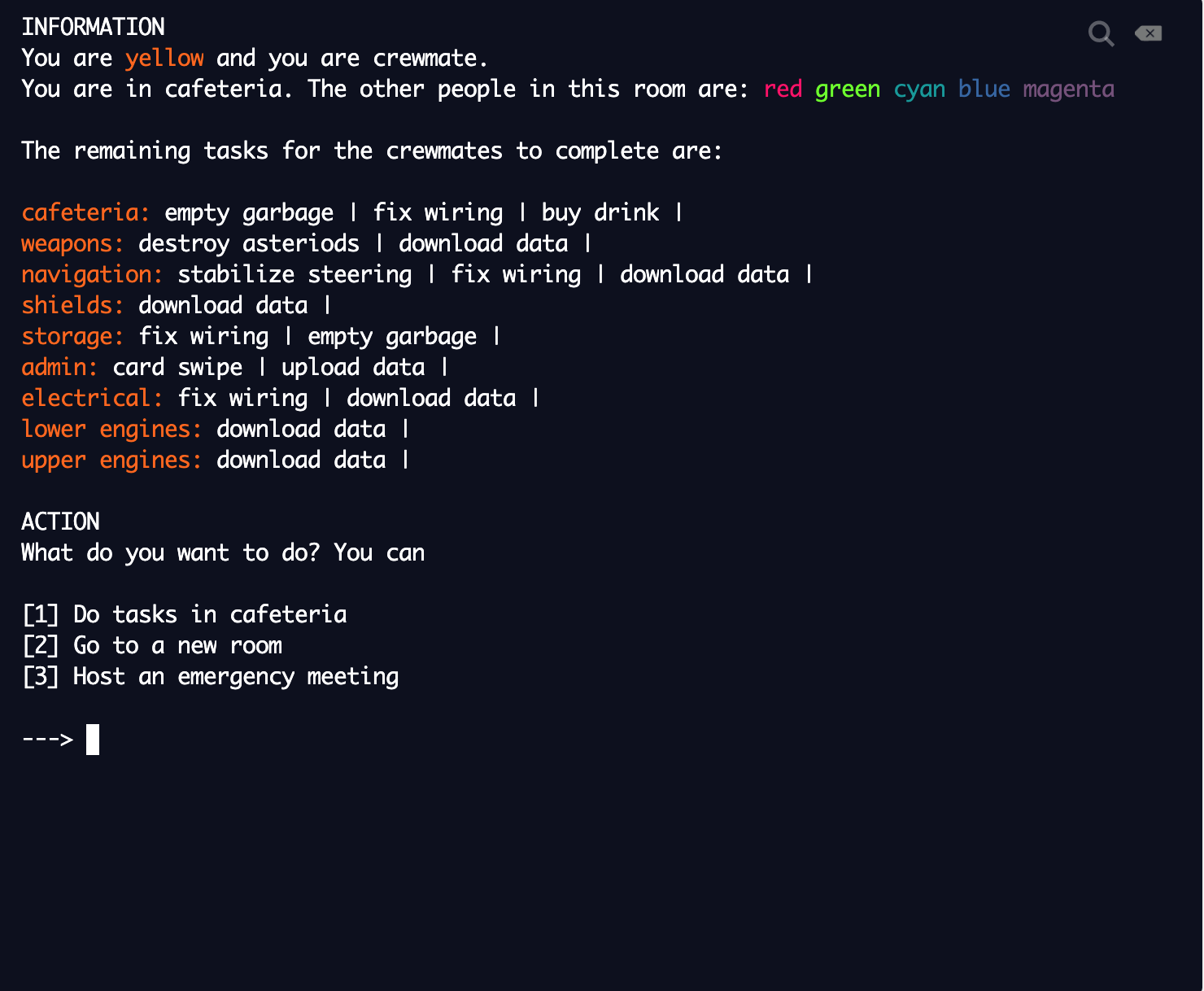 That's how the game starts. For being crewmate, you can walk around and complete tasks. There are 2 main strategies: complete all tasks or search for imposter in admin.

Completing all tasks is a pretty solid way of winning as crewmate. The only problem with this is if you move around a lot, the imposter has a greater chance of killing you.

When you are in the admin room, you have the ability to see the full map and who is in each room. You can also take a look at the tasks that were completed, and keeping in mind that imposters can't complete tasks, you can use the process of elimination to find the imposter, and eject them with an emergency meeting.

This strategy actually works if you don't believe me, shown in the following screenshot is me ejecting the correct imposter. 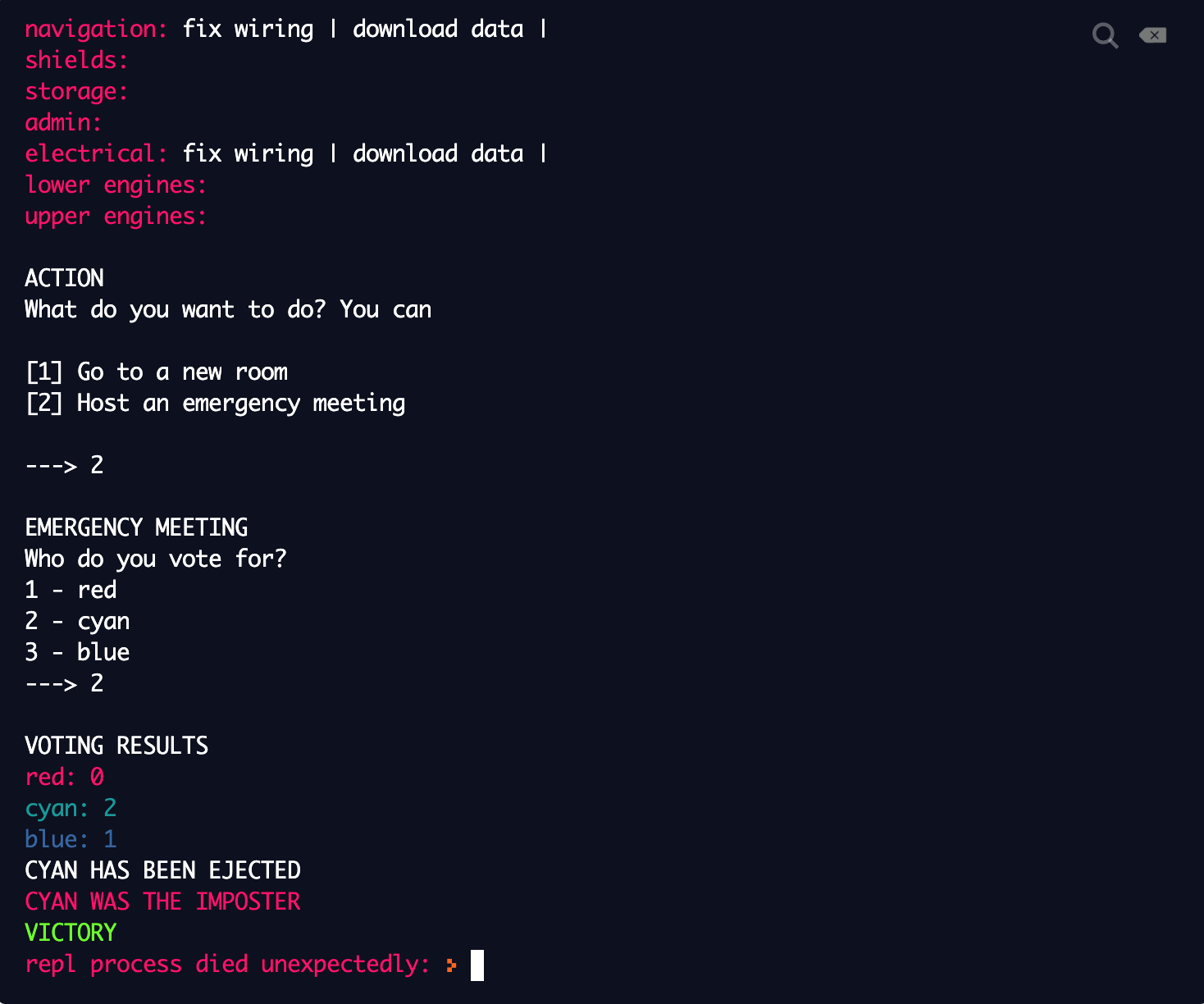 So what happened here, was someone got killed in the cafeteria right in the beginning, but since I was moving to admin, I couldn't find out who did it. I wasn't paying attention and someone else got killed. I confirmed blue weren't the imposter, since I saw him doing tasks. I think I saw cyan vent from storage to navigation, so I tried to eject cyan, but there was a tie (no one was ejected) I started paying more attention to cyan's action, and when I saw cyan kill magenta, I tried to eject cyan, and I won!

You also have a kill cooldown, so you can't just kill everyone really quickly. For being imposter, my strategy is to go to admin first and look for loners (people that are by themselves), and then quickly vent to a room close to the loner, and then kill them.

Using that strategy, I obtained a pretty quick victory. 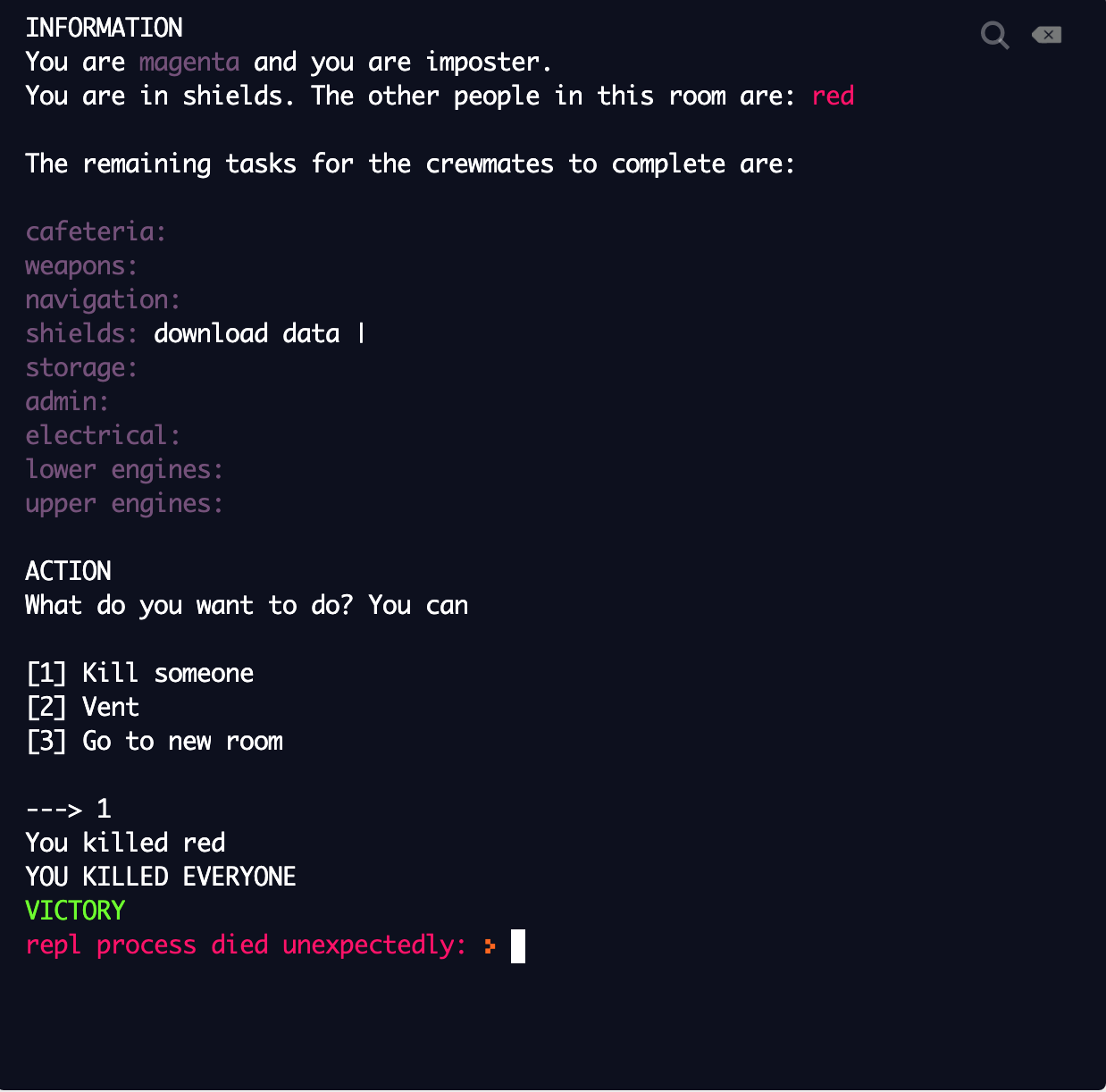 Thanks for viewing this project! Hope you have a good day!

I very unfortunately forgot that I was cyan

@TheLegendBeacon LOL
EDIT: it happened to me :P

@TheLegendBeacon you couldve just voted yourself out to make that comment, lol jk.

@TheLegendBeacon well, I was crew and accidentally voted myself so...

I feel like the strategy for an imposter is to host a meeting right after you kill someone so you can eject another person.

@YuAndy You can always be a hermit in admin, where you spam map and kill anyone who comes in (the bots somehow do not see the dead bodies)

@YuAndy BUT. what if someone ejects you? 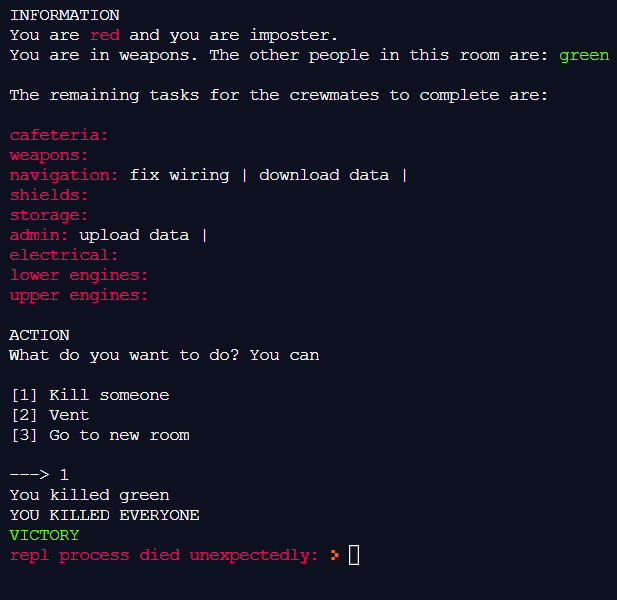 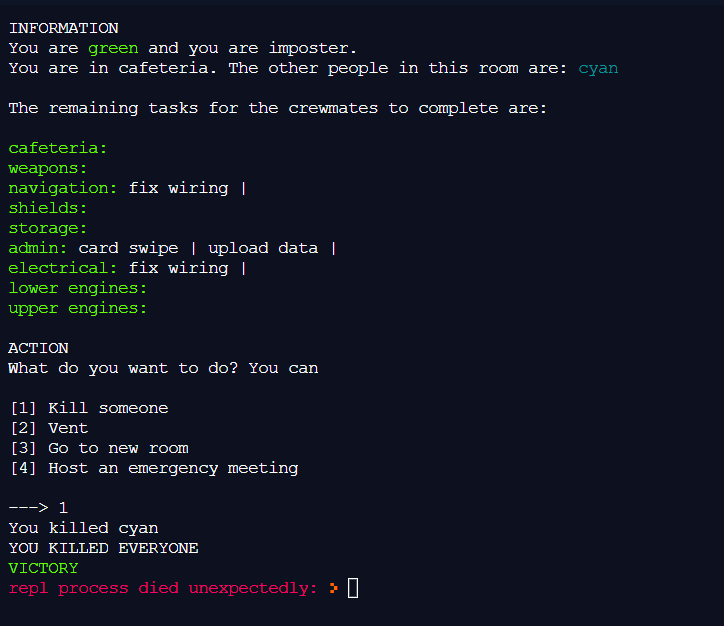 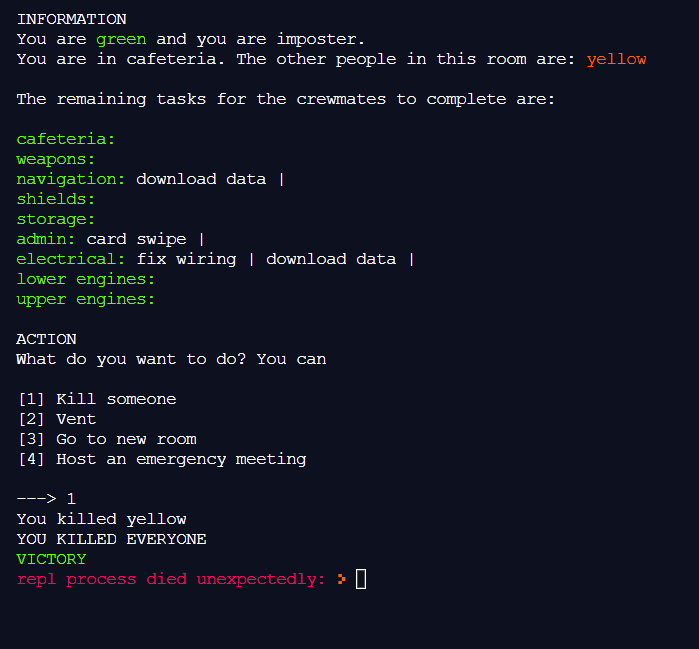 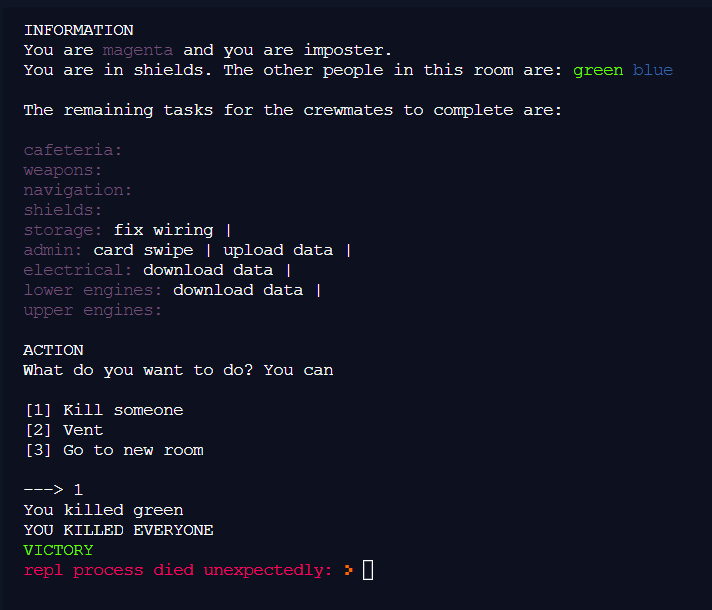 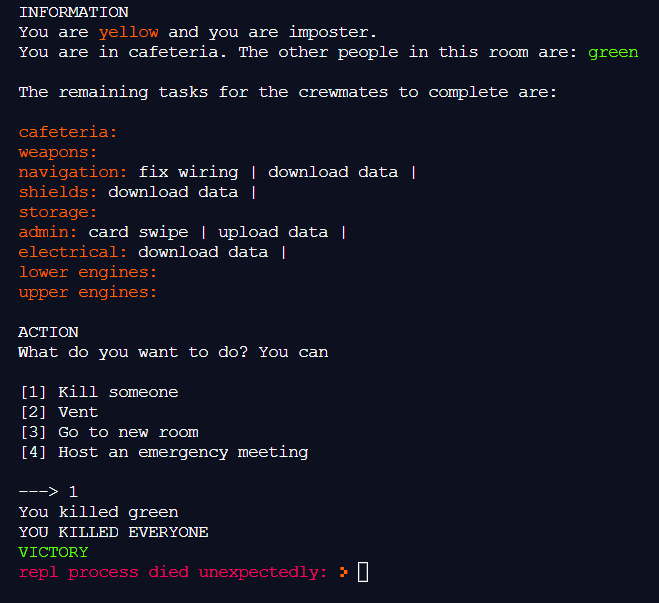 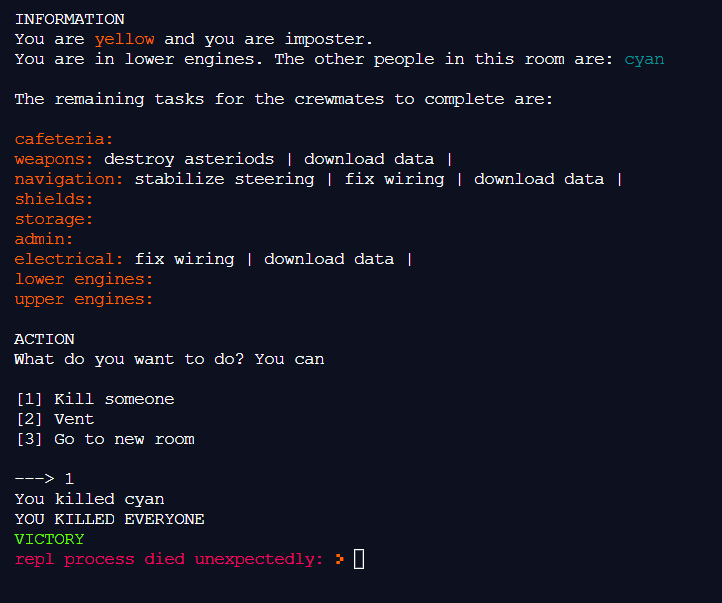 @JasonLiu19 op strat is to just stay in admin and do the map, and when someone comes just kill 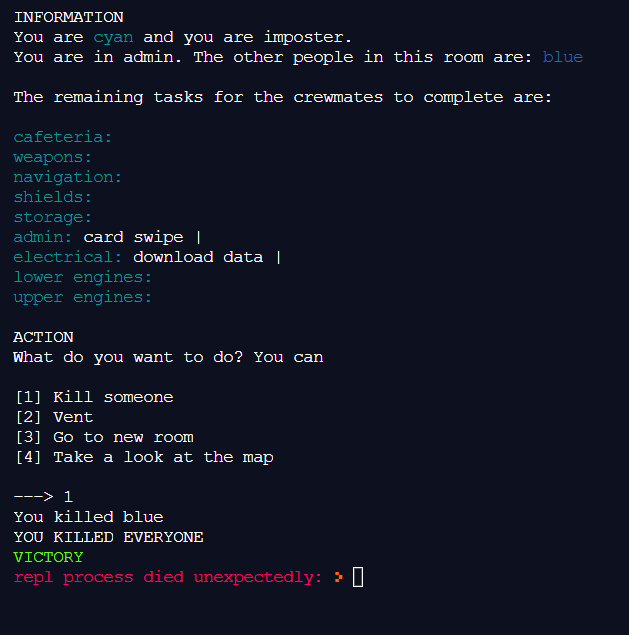 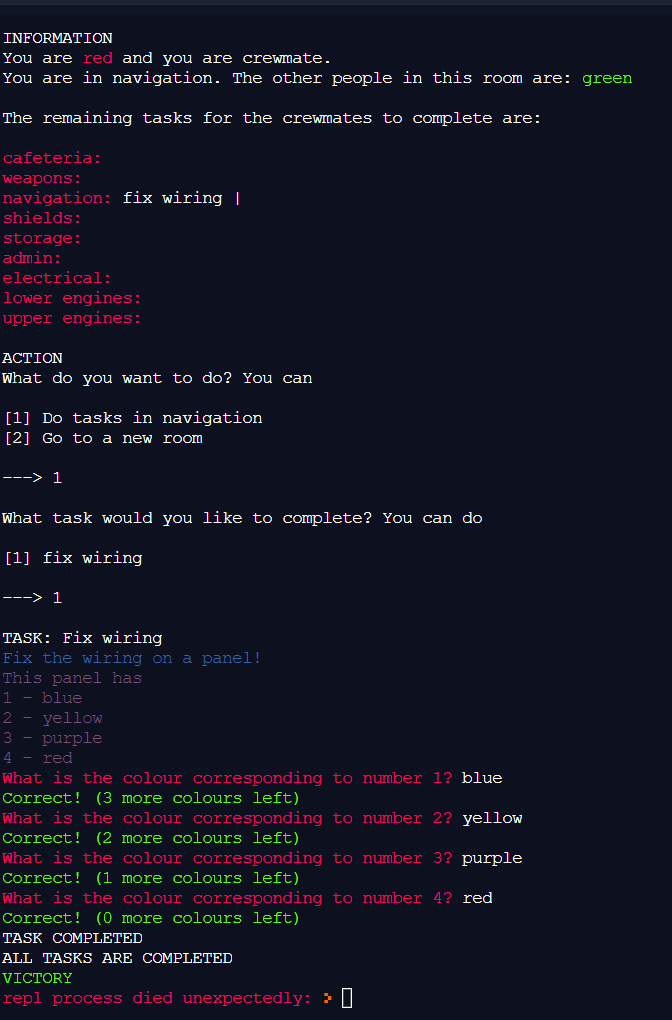 I was pretty sure it was yellow using map and process of elimination, but when I did the emergency meeting, everyone voted each other. So I decided to go to navigation and finish the remaining tasks. 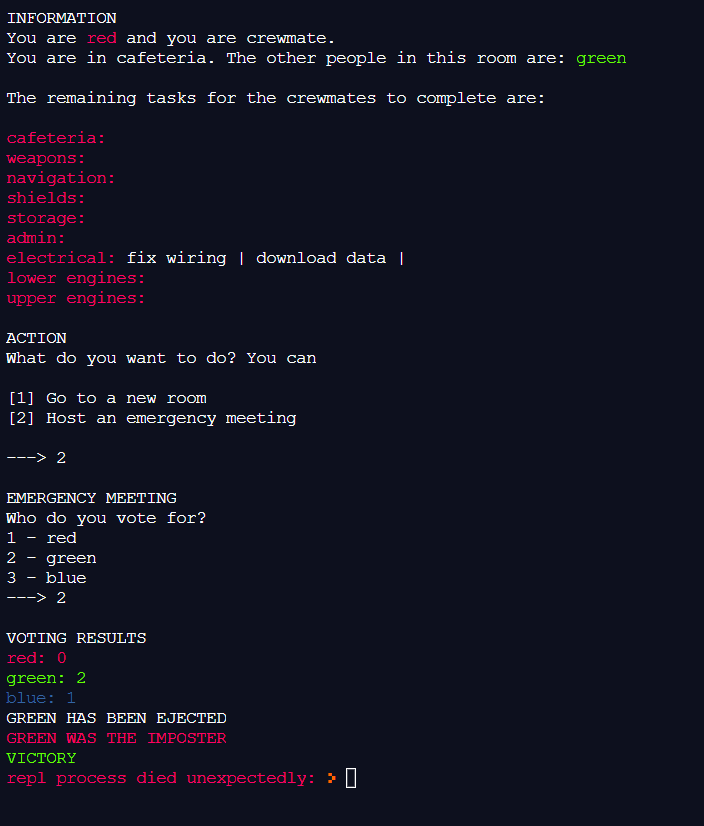 @JasonLiu19 Isn't that what the killer has to do anyway? Or is dat what you meant? :P

@EekulD I was a crewmate in the last two, one way to win is to check the map and observe how the AI interacts with you. On the imposter, I stay in admin to skip turns until someone comes.

Hey, @Smart0ne, do you still need help for the chatting function?
If so, I made a chatting app and I will post the link of my post here if you need it.

@Muhammad_SJC Thanks! I'm currently paused this project for now, so I will get to it later. I probably will need some help, so could you link your post? :)

MUCH BETTER THATN YOUR LAST ONE

DID YOU FORGET THERE IS A CAPS LOCK BUTTON ON YOUR COMPUTER AND THAT YOU CAN TURN IT OFF? @GEISTCODER

LOL! THERE ACTUALLY IS ONE. IF YOU LOOK AND YOU ARE SLIGHTLY INTELLIGENT THEN YOU CAN SEE THAT THERE IS ONE! @GEISTCODER

DUDE OFCOURSE I KNOW THERE IS ONE! @lukel_lv

I DONT PLAN ON USING UNDERCASE LETTERS UNLESS I HAFTA!! @lukel_lv

@GEISTCODER HOW DO I TURN OFF CAPS LOCK AGAIN?

I got lost in the rooms… Add a map.

@RahulChoubey1 :) I was too lazy to do it, but search up "among us the skeld" in google or whatever, and you'll see some maps.

Why the console? I'm going to make this entire thing with multiplayer functionality online!!! Yay! Thanks for the idea!

Lol u better have been, but ur right, clickbait comes from python @RayhanADev

@RohilPatel if you doubt me check out my profile 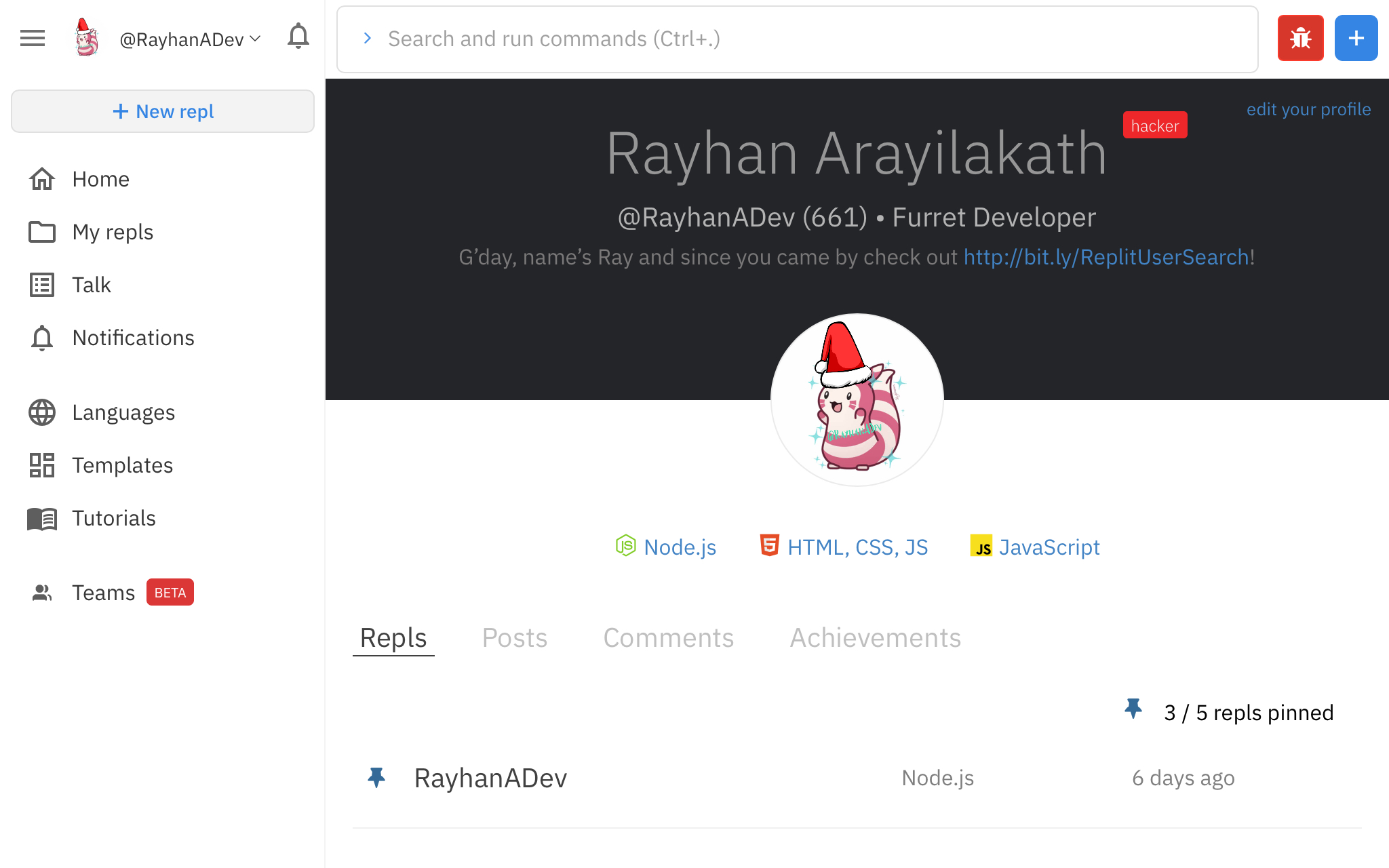 Only lang = Javascript coder xD. and yeah it’s because so many people write in python!

@RohilPatel The only problem with doing it online is keeping a server open to host with. Even if people run the rooms on their own computers you need a central server to show people rooms. You could just have people connect to IPs directly, but before you know it, the whole system is very complicated. I've thought this over, and the best way to do it is to use algorithms witha little randomness to make them more human. I'm currently working on a version with full PyGame graphics and I considered doing online but it leads to complications. If you have the money buy a domain and host a server, but otherwise I wouldn't recommend online.

yo, who were u actually taking [email protected]

@RayhanADev Do you mean things like polygott and OCaml which are only accessible via the languages/ url?
If so, consider me part of that gang

@firefish hahahahah you're in!!!

The only problem with doing it online is keeping a server open to host with. Even if people run the rooms on their own computers you need a central server to show people rooms. You could just have people connect to IPs directly, but before you know it, the whole system is very complicated. I've thought this over, and the best way to do it is to use algorithms witha little randomness to make them more human. I'm currently working on a version with full PyGame graphics and I considered doing online but it leads to complications. If you have the money buy a domain and host a server, but otherwise I wouldn't recommend online.

@firefish how many do you have? For me I have these (you can’t get them by using + New repl)

@firefish I got them all (Pokemon vibes)! Each one with a unique language name (NodeJS Static is creepy...) 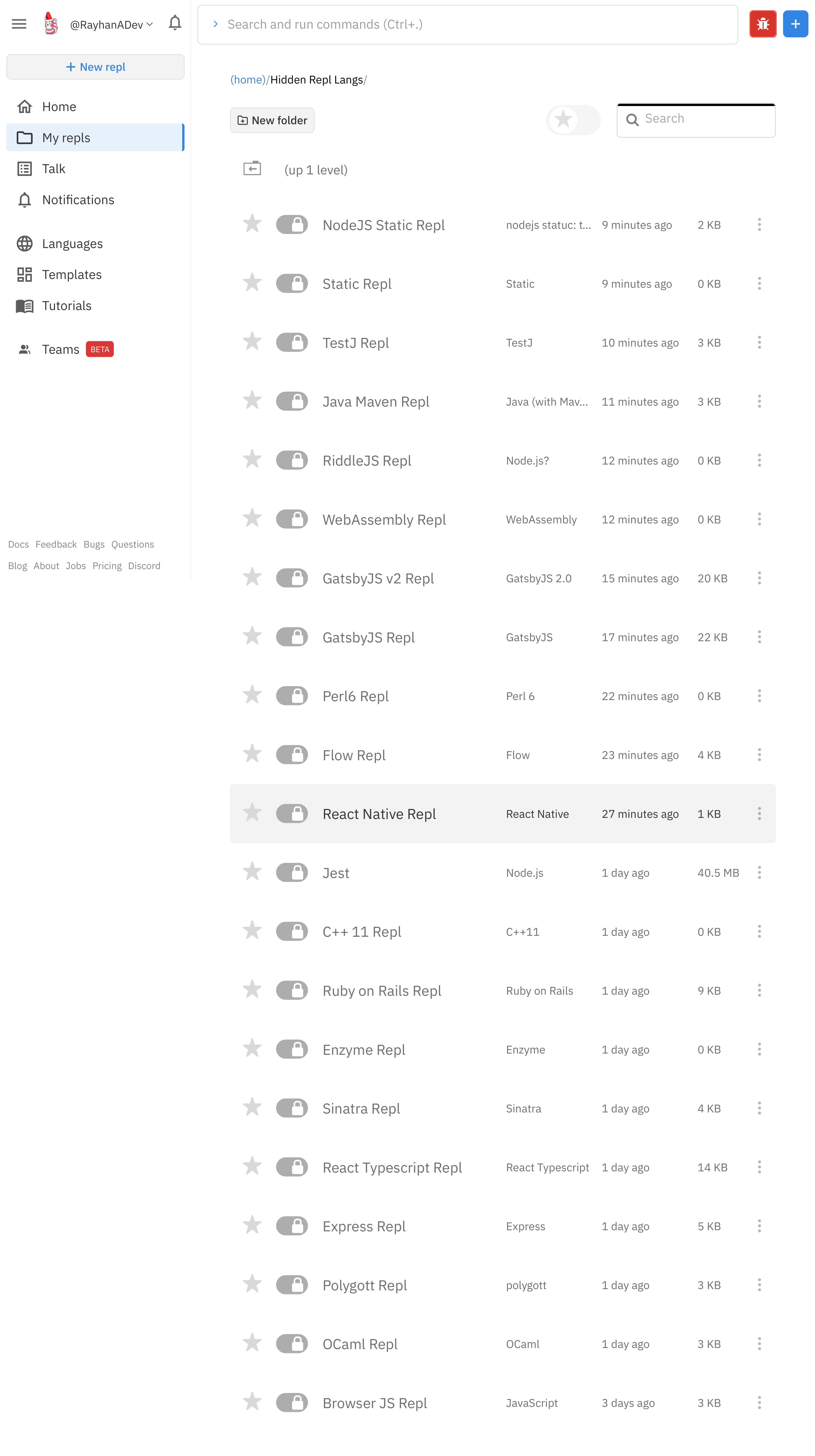 @RohilPatel yah grate try not the best though

@RayhanADev lol i didn't now there were that many languages

@firefish lmao, I think I got them all actually (not including the betas for each language)

@firefish sure why not xD.

@RayhanADev Which languages have betas in the next question

@firefish actually there’s a neat tutorial on how to find all the languages (my directory brute-forcing is over xD) Click here to see them.

You could have easily unpinned that or changed your favorite coding lang. @RayhanADev

@lukel_lv I’m confused what are you talking about?

Oh wow, this is amazing. 100x better than the previous version.

BUG
When the user enters an invalid character or just nothing in the box, the game breaks. This problem can lead to unintentional losses of progress and can be caused by unintentional clicks.

@Hamburgr Yes, it has been reported 5 billion time before. :) I don't have any plans to change the program (cuz im lazy) right now, but thanks! 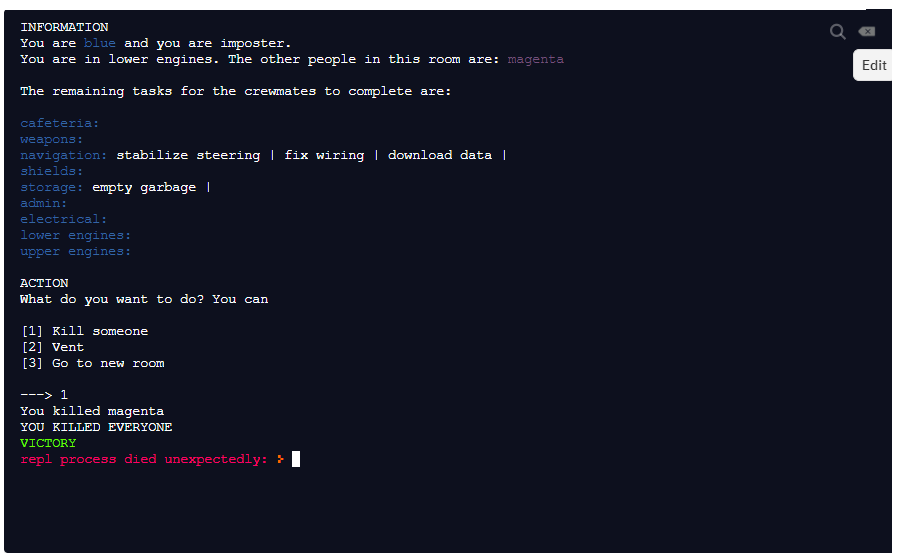 I cannot believe that after the emergency meeting, I killed magenta and won! LOL RIP magenta

@Smart0ne I can get a screenshot but in one of the votes, this is what happend-
VOTING RESULTS
yellow: 1
green: 2
magenta: 0
I am magenta.It seems green voted HIMSELF

@Smart0ne GREAT Job! I've never seen a working among us before, except for the one @FloCal35 made.I heard from him that you asked permission too use his code to make this as a foundation.
P.S. A few people forked you repl and posted it copying you. I think I reported a few of them.

@SmartOne never asked permission @LingWu1 (but he didn't have to). Did I inspire you @Smart0ne?

@LingWu1 :( Plagiarism is a horrible thing. Sadly, there are always going to be cheaters out there.

I think I found a bug.

Venting in front of everyone in among us is hilarious 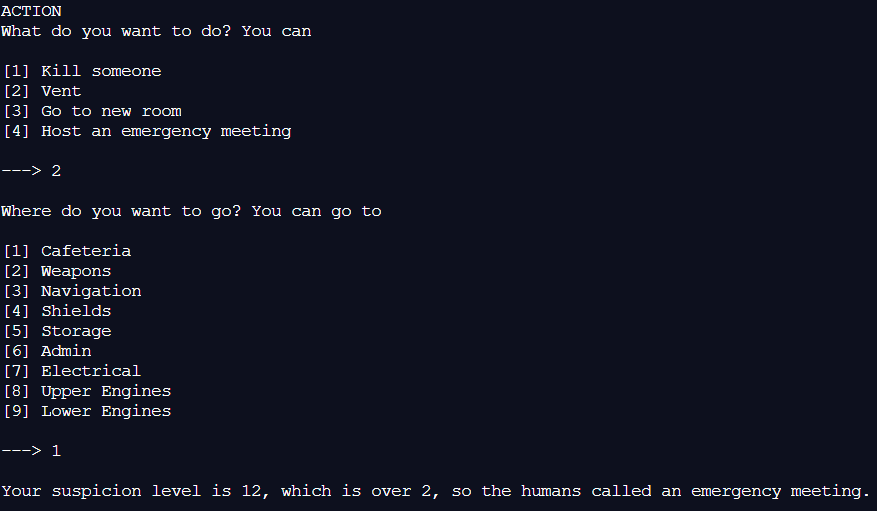 not being rude but its 'hear' not 'here' 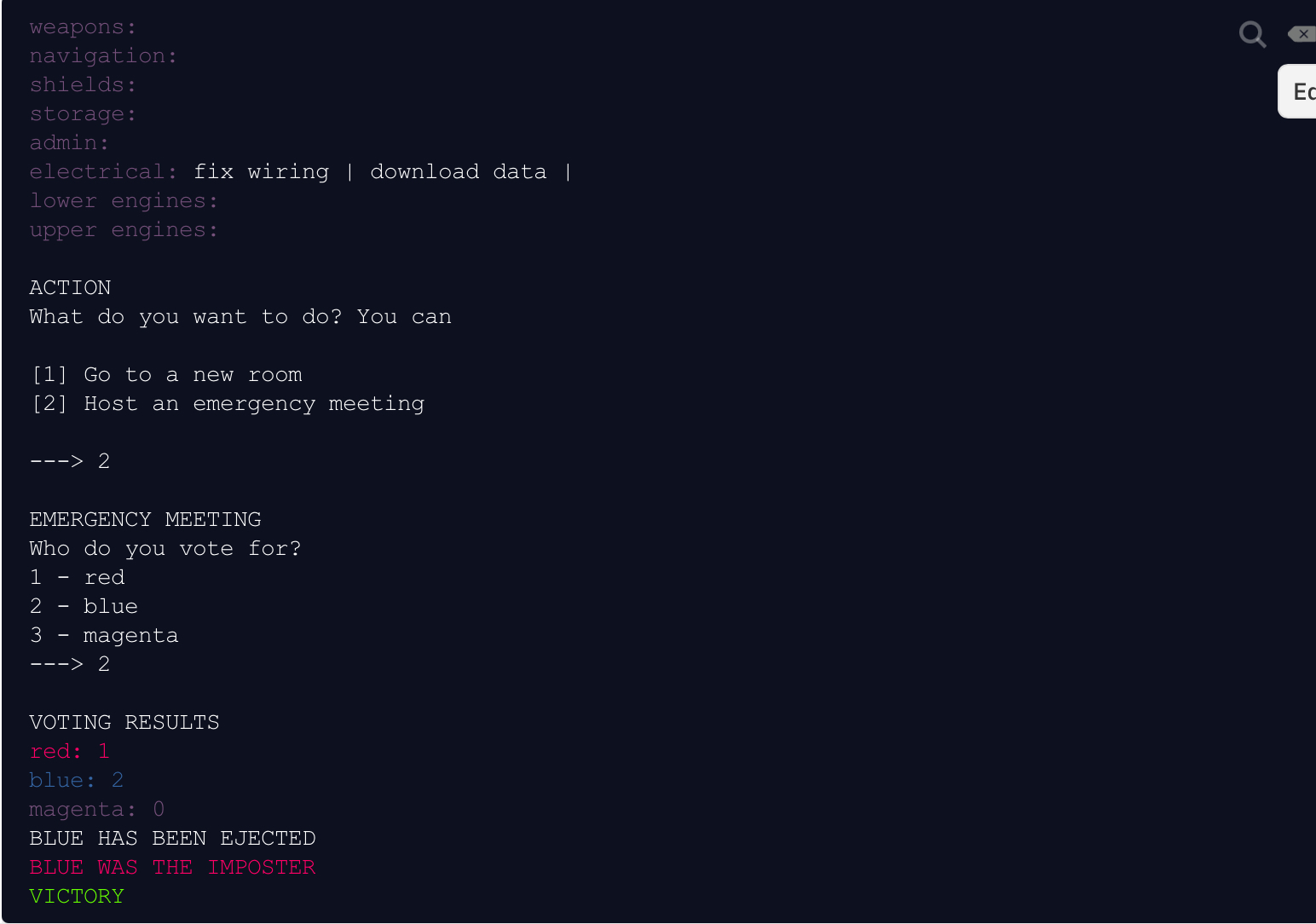 how do I play it? 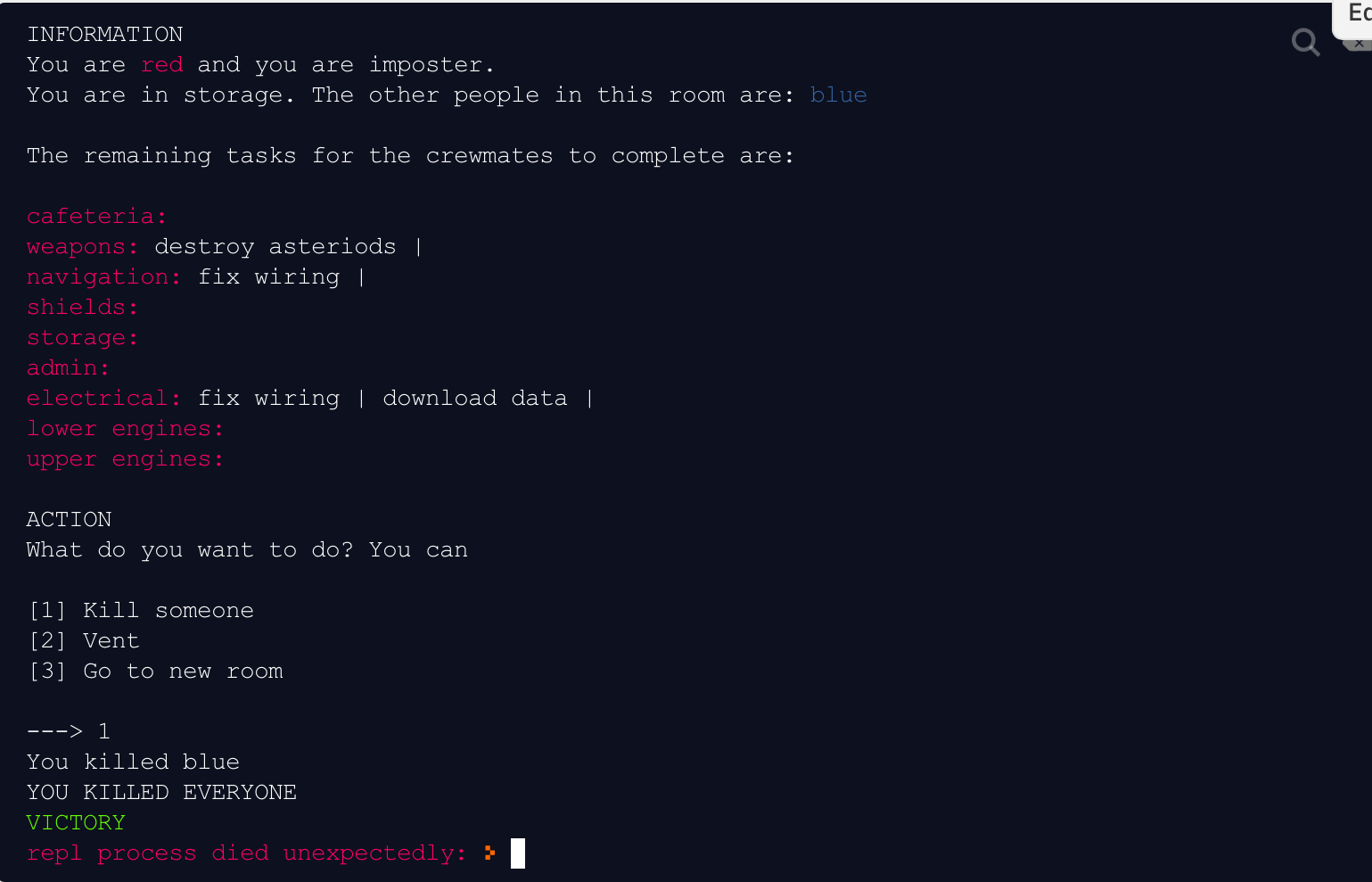 Fortunately for me green voted for himself :) 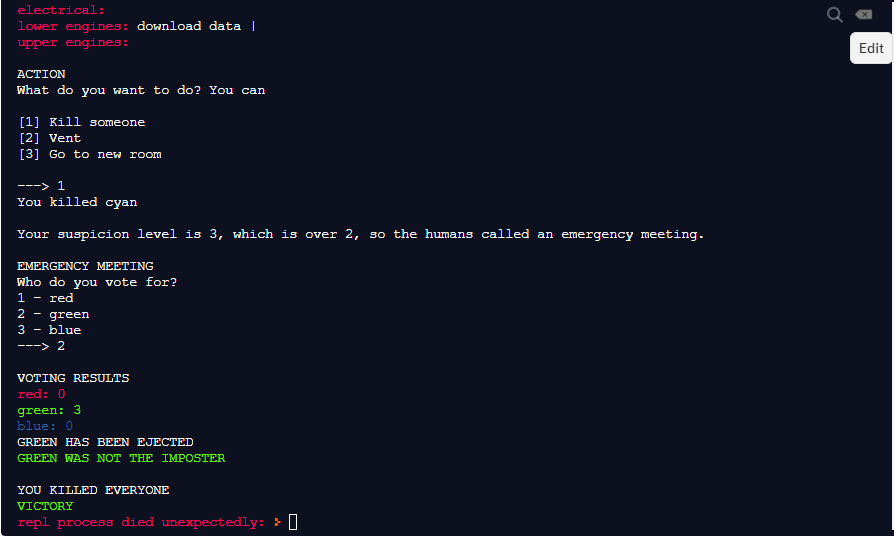 @Smart0ne can you add rooms Medbay,Reactor,02, and Security with tasks?
Thanks!

I have a sabotage :shutting the doors to the rooms

Nice @Smart0ne.Sabotaging might be a nice big update to the game.I recommend it.Also, please if you can explain more about the suspicion level thing?
Thanks, Anonymous(LOL)

ok, @Smart0ne.Do you mind if i fork your code and then try to add sabotaging?It might take a while since I am a python beginner-intermediate level.But then I could share it with you and maybe it will help. 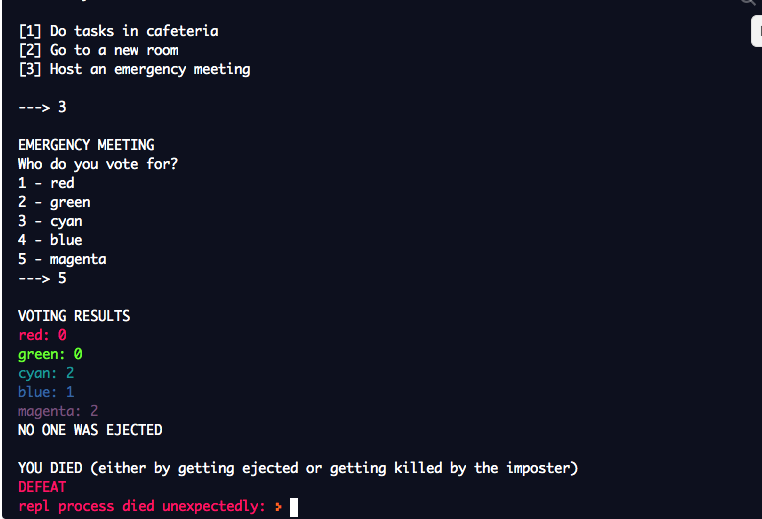 @BiIINye Imposter probably killed you right after the meeting.

lel i died on my third move