I just realized how much I've improved in almost a year. I've come from being a noob programmer in HTML, and I've become to be like top 20 (I think) on repl.it. Obviously I couldn't have done this without a good community, and I would like to thank the following people:

@Vandesm14 - Helped me a bit
@AdCharity - Convinced me to use Node.js instead
@CSharpIsGud - Showed me stuff in Node.js to help me
@Zavexeon - Showed me that anything is possible to make when you try
@Coder100 - Heavy Critic when seeing my code: made me better
@xxpertHacker - Forced me to be less sloppy with my code
@Theboys619 - Helped me with basically everything I didn't know, and still does.

Obviously there are more people, and if you happen to see this post and you did something, let me know!

I also want to thank some services:

Also, there is another thing. It has vastly made me better at coding: @amasad I don't know if you remember this, but I was kicked from the server because I was a noob at using discord. I apologized and you let me back into the server, and then I could ask questions. It helped me grow and much more! Thanks a lot!

Obviously I need to include a repl with this, so let's post a repl I made before I knew what repl talk was. Ready? Go!

Congrats Rohil! May the cycles be in your favor lol

Glad to be part of your coding journey!

@Theboys619 But the question remains, what comes next?

That's what I was thinking [email protected]

@Theboys619 I was thinking Rohil would quit programming and move on to the next part of their journey.

That's awesome @RohitPatel! I hope you keep getting better and better!

Thanks for the amazing repl community! Have a great thanksgiving! @amasad

...being a noob programmer in HTML...

Wait a second, you programmed in HTML!?
I stand down, you're obviously far better than most; you deserve to be #1.

@RohilPatel In XML we can use loops, transform stuff, select stuff, change encodings, some simple but neat stuff, but if you developed a program in HTML, then you ought to mentor us, teach the next generation of web dev, who needs that little scripting language JS, that style markup CSS or that Wasm binary code, you can program in HTML, that's just on another level.

Please tell us more, what else has your coding journey brought you to accomplish?

@DungeonMaster00 CoffeeScript didn't die out yet?
Also, I can't support CoffeeScript, as it misuses JavaScript as a compilation target, which is terrible for a whole host of reasons I can't even begin to list.

A moderate portion of CoffeeScript was implemented into the ECMAScript standard itself anyways.

top 20 is a huge stretch but you have come far, gg

those were good days..

@RohilPatel , same as me :D

I don't mean to be offensive to you but, you aren't top 20, so like don't brag please: 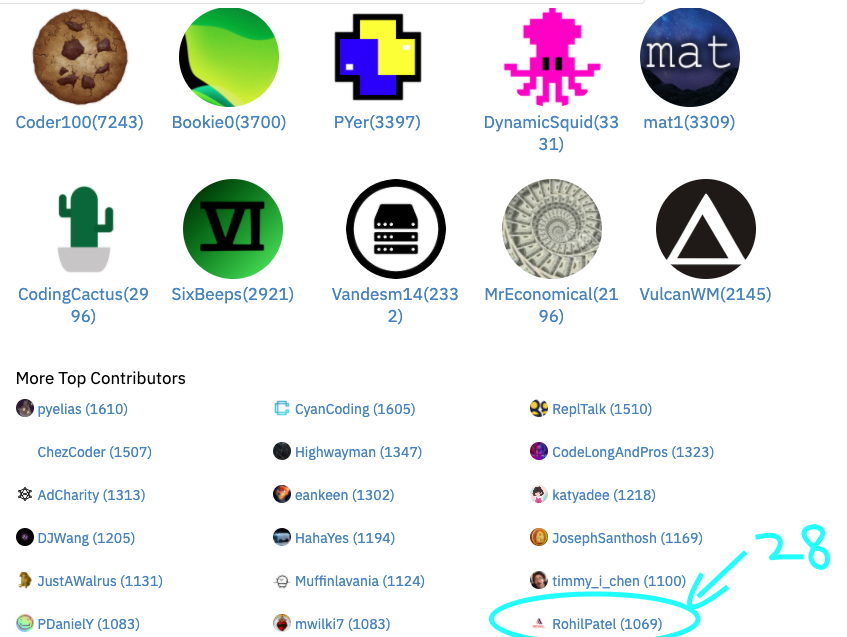 First, I said I think I was in top 20, and next, I'm not trying to brag @JosephSanthosh

@JosephSanthosh as this is coming from someone who received their cycles illegitamately, I don't want to hear hypocrites.

@JosephSanthosh says you, your worth on repl has nothing to do with cycles, for instance, you have not one post that isn't spam, so if i was the judge, rohil would be way ahead of you putting him in the top twenty

FYI I didn't ask for those cycles, and as bookie and codelong&pros said is that those cycles were cycles I received late and came as a chunk. And talking about hypocrites I said no offence i was pointing out. You should also think wisely before stating your refutations. @HahaYes

Tbh I'm rly confused as to what ur trying to squabble or conflict! Secondly I really wonder what ur definition of spam is?!?! You are rly are one confusing person @BobTheTomatoPie, no offence. Just like u I don't post so often, I just go and comment and give feedback. I'm not sure why you're so aggressive, I thought you were pretty cool. as I said above no offence to @RohilPatel.

Sorry dude it’s just on repl people treat often times are jackasses to me(discord wise) notice I was banned, so I get pissed at the community fast on sudden impulses. I hope u can forgive me i did not mean what I said when I commented it I was in a bad mood cause of some shit going on In my life @JosephSanthosh

Oh man! I'm so sorry myself for being rude, peace bro. Have a greater day mate. @BobTheTomatoPie

@JosephSanthosh I’m forced to say, yes, you did steal some cycles. Remember this?

Please mark this as correct if it answered ur question! Happy Coding and a Great Day.

I mean it's fine if you actually answer the question...right? @CodeLongAndPros

@RohilPatel Not really, since they’ll mark it even if there’s a better answer

@JosephSanthosh Well you simply just don't post that much, and most of your upvotes are from comments, which are really sus

@RohilPatel nah not talking about you XD

@JosephSanthosh Yo if you read this in a aggressive tone, sorry. I obv interpreted your message incorrectly.

Don't worry about it, have a great day too man. @JosephSanthosh

Thank you so much! @BobTheTomatoPie

No not really! Cause the last time i did was like a month ago. @CodeLongAndPros

@JosephSanthosh It still happened, and that’s why I say that the statements had truth to them, however little that may be.

uuuuh what? truth to what? wait wait what truth? why r u getting all patriotic now? @CodeLongAndPros

I'm not sure if this is a mistake or something, but I'm not able to log in or register, like where is the button? And also wdymn top 20 in repl.it, just curious?

Yea! U may want to put that in the description, how do u know if ur in top 20? @RohilPatel

VScode and Xcode would like to thank you for your business

I love that you're trying but I think you forgot the body tag. :)

Ah yes, I do hope you recognize that this repl is over a year old now. Don't think I'd forget the body tag ;) @EitanAlperstein

Hey, I'm not sure if this is some poetry, but I would like you to clarify about this. I'm glad to help! @QuaziMayel

@RohilPatel
Okay I’m very bad at poetry but thanks. If you have any idea how to not let your computer crash or die a billion times that would be helpful

Oh yeah! First, do the software updates if they are available! Second, to prevent them from dying, turn on modes that save battery, or since I'm always at home, plug the computer in while doing things! If you don't like charging - then use a faster charger. I'm using a 61 watt adapter. @QuaziMayel

I once heard of the <rohil> element. Have to look up what it does lol @QuaziMayel