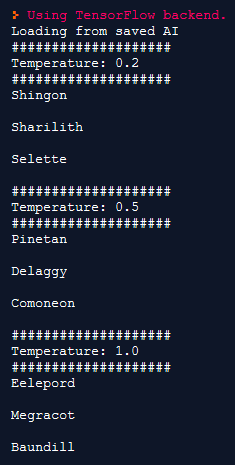 This is a pre-trained AI, that creates new Pokemon names based off a list of around 800. The code is actually really, stupidly simple thanks to the all powerful textgenrnn library which you can find here. If you would like to train it yourself, fork it and delete all the files that start with textgenrnn. If you want it to create more realistic names, you should change the num_epochs value to something higher. Granted, this means it will also take longer to train.

Even with this small amount of code, you learn a lot about AI. The first thing being what works as data. I was originally making an AI from my spam emails, however with only 15 emails, the AI was generating gibberish with no sign of improving. After training with pokemon names, 800 of them, the progress it was making was becoming much clearer. The problem with pokemon names is that it's a single word. The textgenrnn lib works much better with sentences, and because of this I had a very high loss ratio. Loss is just a number that's used to show how different the AI's output is, to the input or some other determining factor. Lastly, temperature determines how extreme the AI's Pokemon names are. A low temp means less creative but more accurate, high is the opposite, and usually more fun!

Yes, and no. I think I was able to create an AI that did learn, for example you'll see that early on the AI is using vowels anywhere, but eventually keeps them in the center of names, which is how most Pokemon names are. In addition, it very quickly learned not too use caps letters at the beginning, and only at the beginning. However it's really impossible to grade how it did. Pokemon names are random gibberish already, so it can make anything and it'll sound just fine.

But go on! Run the repl and see what names it makes for you!

2 years ago
You are viewing a single comment. View All
Zavexeon (1041)

It has Pokemon in the title so it automatically get's my like.

My profile pic is a Pokemon, lol. 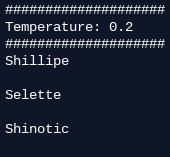 Also Shinotic is so close to the actual Pokemon named Shiinotic, lol.