← Back to all posts
React: 112 Pictographs
malvoliothegood (781)

This app shows 112 pictographs. They are HTML encodings that are similar to emojis. The pictographs are shown at a greatly increased font size and look similar to SVGs. When the app loads a random pictograph is shown. The series can be stepped through using Next and Previous buttons. The HTML encoding for each pictograph is displayed below it. To use it include it in HTML. For example, in the console you could write:

This will display a donut - see image below.

React is the View framework used. Functional components are used along with the useState and useEffect hooks. 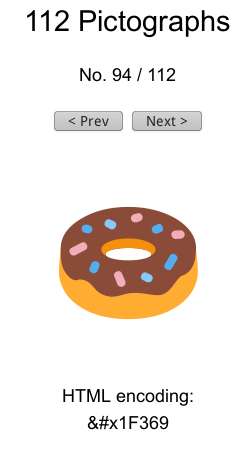