The Maze, but its cool

Welcome to the maze!

Some of you might have already seen this, but this is not just a repost for nothing. I saw @InvisibleOne 's post, and saw how cool Background colors are for walls and such. So instead of being a box moving around a field of Xs, now you're a box in a full blown out maze! Also customizations are still a thing!

Use WASD or the arrow keys to move around the maze, and your objective is to get to the yellow treasure! Every level there is one secret though... And in later levels there are invisible fake walls and 'W's, which you can walk through!

In the newest levels (level 19+), there is a button in the top left and a weird wall blocking the treasure. Wonder what will happen?
(Thanks @dabombdgdzjr)

NO MORE FLICKERING? (and without curses yassssss)

Some things that can happen

This can also happen 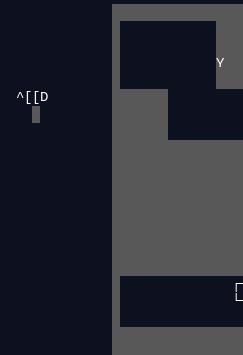 Dont worry it will disappear after you pass a level, and you can press c to get rid of it as well

Want to make your own maze?

Well you can! Go here and create your own! There is a little tutorial too on how to create your own, and you can test it by just hitting run and then hitting enter! When you are happy with your maze, comment it below. I have already added one maze created by @JasonLiu19 !

Do you know the muffin man?

Yee I think so @Muffinlavania

@NoNameByProgram the muffin man, oh, do you know the

@Muffinlavania The one on Drury Lane, or the other muffin man?

@Muffinlavania i AM the muffin man...

I know the Muffin Man

Ooh 😮 do u know the muffin man the muffin. Man who lives on ..... lane @Muffinlavania

@dabombdgdzjr oh then you're an hour behind me, its 12:40 right now

@dabombdgdzjr ill be on in 5 minutes

XD sorry I had a zoom I couldnt see this, but I have anotheer one my lunch break is over :( @Muffinlavania

Cant packed with work I procrastinated too much @Muffinlavania

@dabombdgdzjr but yea sure its fine

@Muffinlavania Yes, I do... And I believe that it's muffin time!

@Nettakrim told me to replace os.system('clear') with print("\033[H",end="")
I tried it and it worked really well, a lot less flickery

@LillieHarper with the help of someone invisible

i tOtAlLy UsInG tHaT @InvisibleOne

Your welcome, but the thanks should really go to @Nettakrim because he told me how to do it @Muffinlavania

This is just SOOO GOOOOODD and addictive man.

I just LOVE it. :) @Muffinlavania

Super cool game, much better than I can do!

@DarkswordsmanJG its actually not that hard, but thanks! 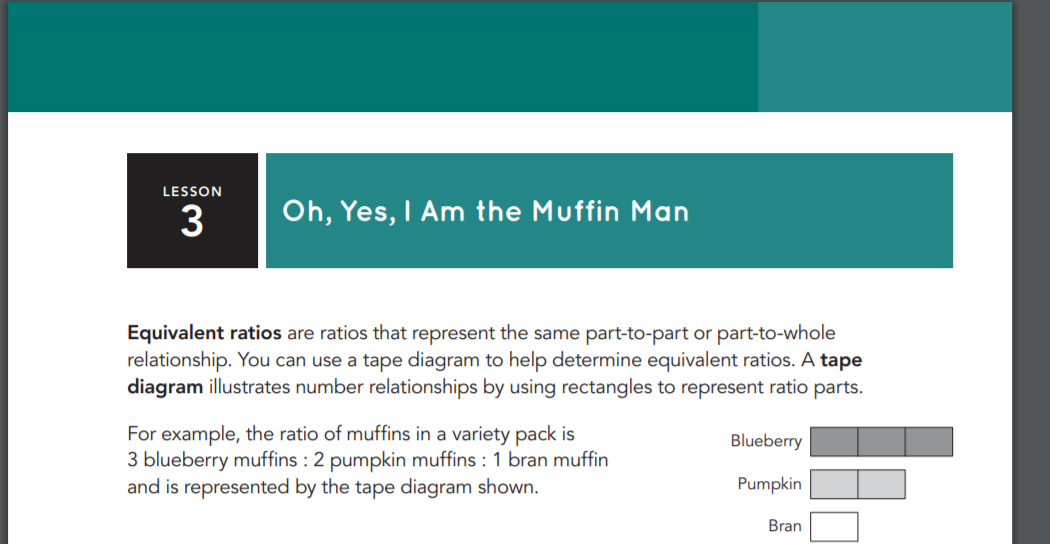 i found this while doing homework

WHAT Are YoU DoINg In MyyYYYYYyYYYY SWamP

im confused on level 12 can someone tell me what to do?

@Muffinlavania ok, but i was trying to go through all the walls, and i found some secrets, but I couldn't get to the yellow teleport thingy

@Muffinlavania i'm also stuck on the 18th level, I found all the entrances, but idk where to go now

@Muffinlavania nvm i got it

@TROD2007 basically all levels after 12 are cheeky

can you teach me how does the script get it when the keys are pressed?

You should try to make the card game Dose because I really liked you uno.

@RyanChoe1 hello, I have a question. Also im chatting here cuz the Among us one is locked so I can't chat there. Well I have a question, I am making a math game thing from scratch, but Im having trouble with making command statements here is the URL
https://repl.it/@TROD2007/Fun-Math#main.py

@RyanChoe1 I'm trying to make it so that way when they put a word or number, it will either say that it doesn't understand or correct or incorrect

@TROD2007 srry i didn’t reply sooner. I was doing homework and eating dinner.

This makes it so that it keeps repeating until you say one or 1
TO use this in all of them just make the != a not in and change the answer to [CORRECT_NUMBER_ANSWER,CORRECT_NUMBER_WORD_ANSWER]' Also if you want to be able to accept stuff likeONEandOnEadd a.lower()` to the input, like this

@RyanChoe1 hello, i am making a new repl that is like a story that I plan on making into something bigger, maybe an app or something. But if you can help, go to it, it says something about it be top secret.

@RyanChoe1 Yay ok, see you there

Wow!!! This maze is super cool! Can I use this as a game for my arcade? All credits will be given.
Here is the link to my current arcade: https://repl.it/@dhruvkumarrajan/Utopia-Arcade-Forever#main.py

@dhruvkumarrajan yea sure, im pretty sure if you want to just run this you put main.py for this maze in something like maze.py, then you make setup.py the exact same, and if you import maze it should run the maze

@dhruvkumarrajan can you put one of my game in your arcade. It's a hangman game that has over 300 word to guess. You get 9 guesses including the head, first body, second body, two arms, two legs, and two feet. Here is the URL for my game... this first one is the main.py the second one are the words for it
https://repl.it/@TROD2007/Hangman-Game#main.py
https://repl.it/@TROD2007/Hangman-Game#words.py

Please do tell me modifications and edits which would help improve the program and also new games.
Thank You!

@TROD2007
Hello. I have already added your game into my arcade. Here is the link: https://repl.it/@dhruvkumarrajan/Utopia-Arcade-Forever#main.py
Please write a 'Summary' for the game, like how it works and what it is about.
Thank You.

@dhruvkumarrajan Hello! I wrote the summary of the game. Is there anything else you want me to add to you Repl? Or is that it?

Great game, but it's only when you get very far in the game that getting the secret is much harder... and also, you can't hold down the button to move, because sometimes it messes up the map with the key you are pressing, but still, great game!

@NoahJospeh for some levels your right, holding down the arrow keys will spam it too much, thats why I added if you press c it will reset itself

@Muffinlavania idea: you could turn your maze game into an rpg...

@NoahJospeh thats actually what im doing, with a different version.
Im going to make this into something

I have seen other maze games and to be honest this is one of the good ones. I really liked it! Had some trouble with level 9 tho, couldn't figure out how to use the X, but maybe I'm just stupid.

Edit: SO as it turns out I am indeed stupid, took me some time that you can't walk trhough every wall

@tomnagel lol also if you ever are stuck press h for hints, but some of the hints are a bit stupid so if you really cant get past a level tell me

@Muffinlavania yeah I tried that and it said something about replacing a 'W' with an 'X' and I thought that that refered to the keys, but it actually refered to the walls and the blank squares.

@tomnagel did you figure it out though?

@Muffinlavania it took me some time but eventually I did, btw you reply crazy fast

@Muffinlavania erm how do you er... blow up the wall with dynamite? 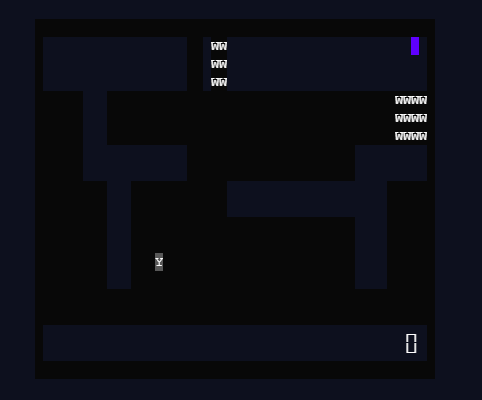 I don't know if anybody else has this problem, but it has an unmatched parenthesis on line 232 in main.py.

All 21! (fix the invalid operand type error too)

@JasonLiu19 also didn't get to play my level

will u plz give me some cicylcs?

pls don't ask for cycles, it's not polite and you sound greedy @BitanyaGebrtsad

@Muffinlavania great game i wish i could do that

@JasonLiu19 sure ill try it, but i might have to make a few tweaks

@JasonLiu19 ok this right here works, ill add this as one of the levels 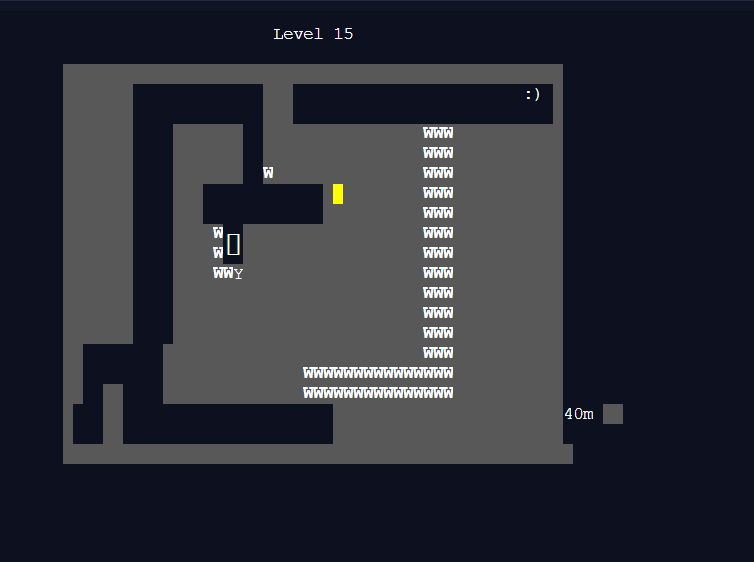 @JasonLiu19 yea sorry i kinda threw together some mazes and stuff, i just fixed

@Name12 yayyyyyyyyy oh by the way i just got this idea, why not let the comment section make some mazes! Here are the things you have to follow though:

You can change the position of the treasure and everything inside, but the player and the outer walls must stay
Things you can do to edit it:
W: Putting this symbol means that it will appear to be a wall with a W, these can be walked through
U: Putting a U means that it can be walked through, but it appears as a normal wall
X: Just a normal wall, cant be walked through
A/1: The A is like a switch that activates the 1. If you move onto an A in the maze, all of the 1s will disappear. Before that the 1s are walls. There are also B and 2, and C and 3 that connect to each other

Another Note: All hallways should be at least 2 characters high, and three characters across

Also if you dont want to make anything its fine, but im probably gonna put this on the post

@Muffinlavania thanks for telling everyone how to make their own maze. you are awesome like usual.

@Name12 yayyyyy also if you want to make a maze try it out! Its actually pretty fun

@Muffinlavania ok. I will if I have spare time. thanks! 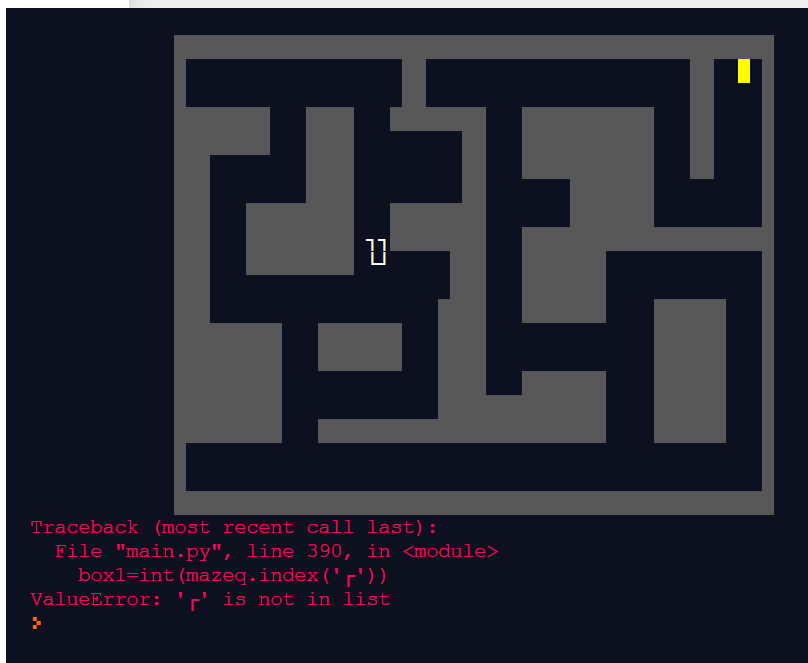 uhhhhh idk what happened... whenever i hit the Y on the maze it shows that

@LoganKwan yea one sec sorry, it should work now? 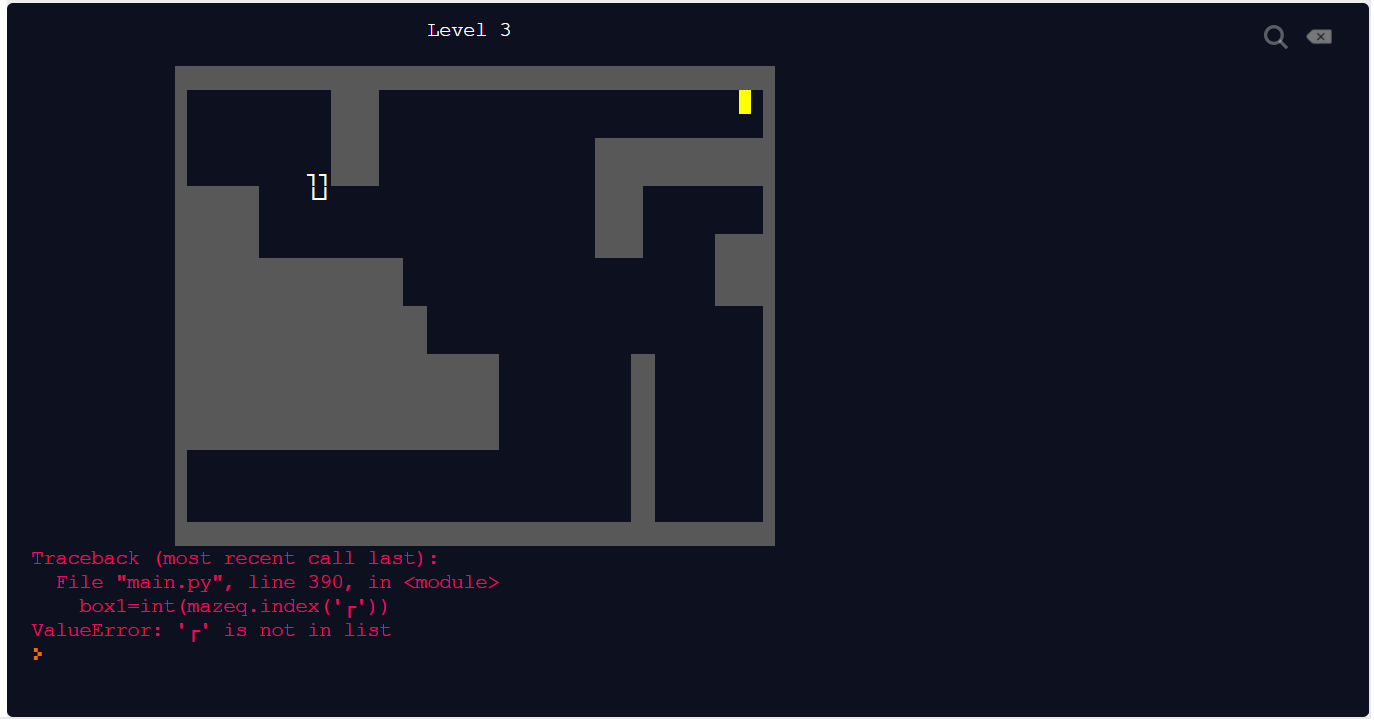 @LoganKwan for me its fine