Hello everyone! This is my first post, so if it's boring I apologize :D

Just wanted to share a little compiled language I made called Sea. It's called Sea because, well, Sea shares many things in common with C. I chose C to mimic because this was my first compiled language — given that C is so low-level, I figured I wouldn't have to do too much work translating to x86.

A quick overview of the language

In case any of you want to try it out, here's a quick overview of the syntax/semantics.

Here we immediately see a few differences between C and Sea:

Control flow (if, else, while) is implemented as a "postfix operator":

A for-loop can be emulated with a block scope and a while:

These control flow constructs can be extended — an excerpt taken from the stdlib:

$int represents the int in question, and $() represents execution of the block given to the control statement. We could "call" this like so:

Sea has support for ints, chars, pointers, strings (char*), and moderate support for floats. If you want to see more about the language, peruse stdlib.sea and the tests (and oldtests, though some of those are outdated) folders in the repl.

EDIT: stdlib.sea uses what might be a confusing doc notation, so let me explain that here.

However, there is a doc notation (used by SeaLib to generate simple HTML docs for a file). It is the following:

SeaLib translates that to the following: 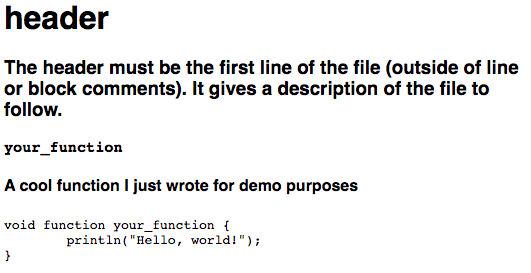 And yes, that file would actually run (aside from saying "entry point main is not defined"). Doc headers are ignored (along with the line after) just like normal comments.

"That's neat — but why are you posting it here right now?"

Unfortunately, I'm going to abandon Sea (in favor of a newer language, Curta). Why? Two things:

So Sea will probably remain in its current state [for the rest of time].

In the aforementioned newer language (Curta), I am learning from my mistakes — it will compile to C++, with the added benefit that it will work on some embedded systems (most notably the Arduino). Stay tuned!

2 months ago
You are viewing a single comment. View All
DynamicSquid (3597)