You may have seen the original "Empty repl", posted by @mat1 a while back.

If you're not familiar, Mat called his "Empty" repl a "philosophical game alll about life". However, I beg to differ. Not just for the sake of disagreeing, but because this "game" (as he calls it) is flawed in many aspects.

But before I tell you why I'm dissatisfied, you might be thinking to yourself:

See what I said about the game, when I was swimming in ignorance: 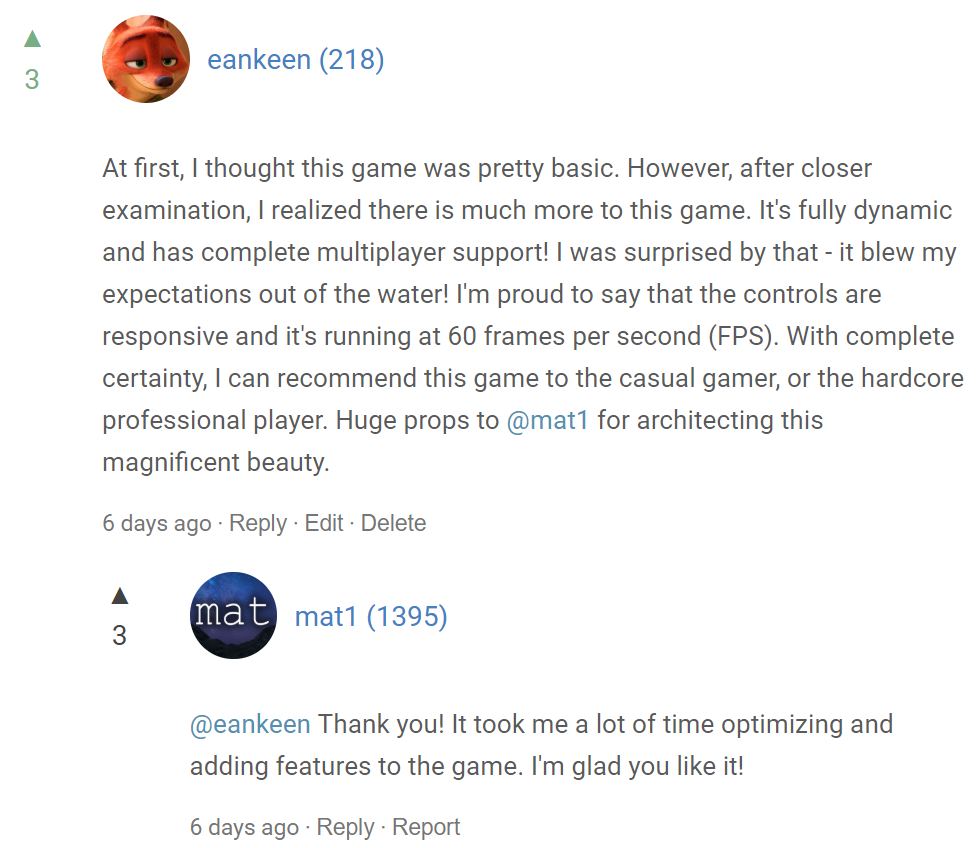 When I did like his project, I felt a sense of purpose and belonging. Mat's gameplay demonstration flooded me with surreal emotions. I'm a bit hesitant to admit, but it caused me to have some out-of-body experiences.

However, I'm undergoing a lot of stress and experiencing a major headache just by looking at his post (let alone reading it!).

Why, you may ask? What caused me to change my mind? The reasons are provided below.

I have a major issue with Mat's so-called "Gameplay" section. There is a deep flaw.

I'll let you take a look at it first! See the screenshot.

It's quite obvious. The problem lies on line 2, column 66

As you can see, he typed

Excuse me? Did he just italicize the period after the word "run"?

Now you can see why I'm all bent out of shape! That's just wrong. One simply does not simply italicize the punctuation after an italicized word!

Oh my God! This time, he didn't italicize the period after the word "run"!

What is it Mat? To italicize or to not italicize? Make up your darn mind!

Mat has this GIF demonstrating his main "gameplay"

Yeah, the GIF's cute and all, but without even realizing it, Mat exposed himself. You see, after clicking on "run", there is something that pops up on the screen.

Holy mackerel, that looks ugly! You need to see some pics to truly understand Mat's grievances:

After looking that, I can't help myself but think about how many lives were wasted, and how many souls were lost when Mat chose "Python".

Now take a look at my game!

My console window is much more elegant! There are less characters, and, most importantly, they don't overlap the icons.

Is it now such a surprise that I now dislike Mat's original program? It should all be clear now why mine is better.

I'm surprised Mat hasn't already apologized for his two major mistakes. Without further delay, let's move on to our last and final issue.

Mat's repl has thousands of issues that I can dissect further. However I'm limiting myself to 3 issues, rather than two thousand, or even fifty-two thousand issues. I'm not limiting my self to 3 because I picked the number "3" arbitrarily; rather, I chose 3 because because it comes after "2" in the set that includes all natural numbers. 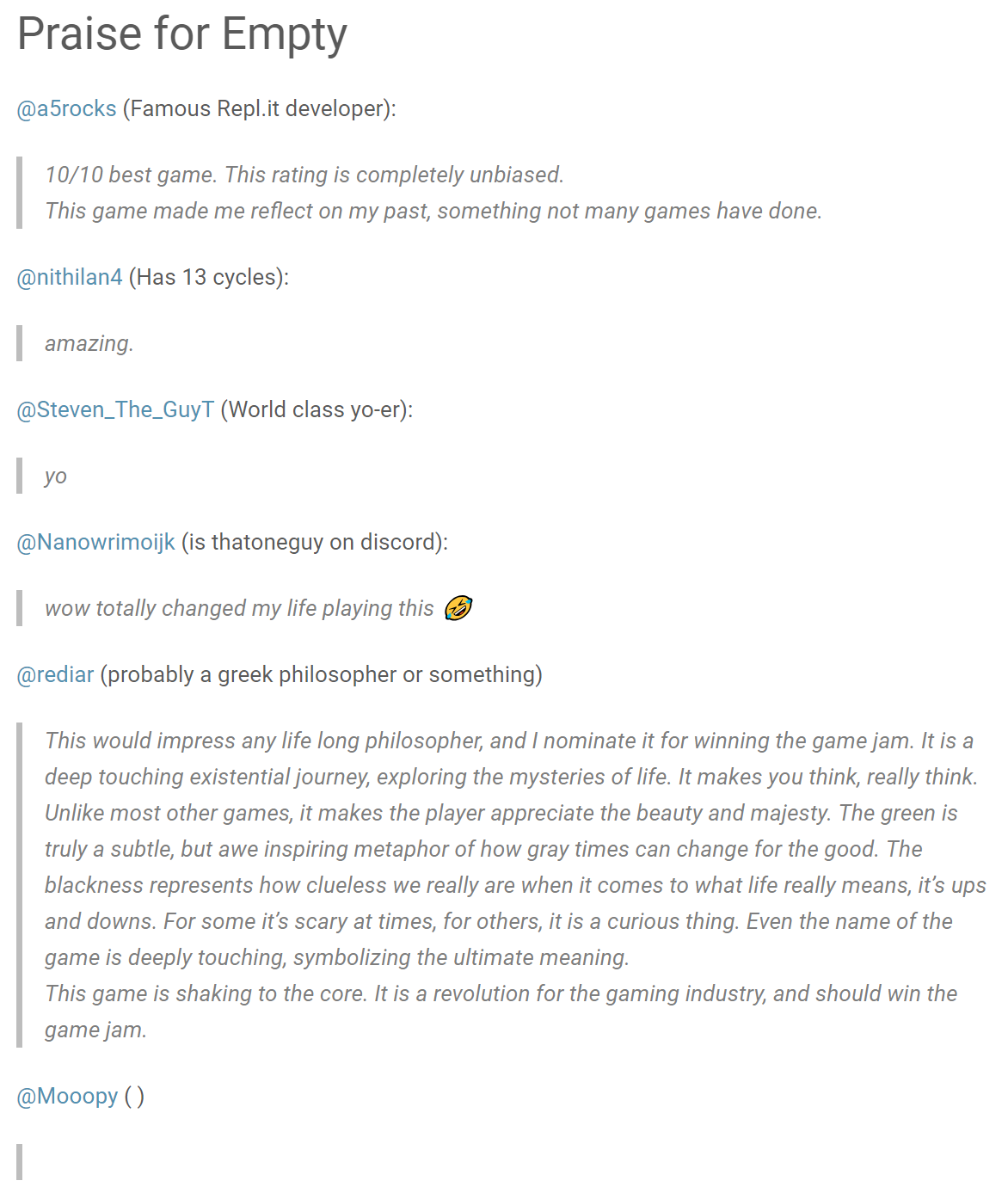 As you can see, quite a few people gave positive reviews, but there is one thing that Mat conveniently leaves out. You see, Mat walked up to me, looked at me straight in the eye, and asked me to leave a positive review in exchange for a load of cash. He actually did this!

You probably want to see some cold-hard evidence right now. Well lucky for you chap! - I have a totally forged screenshot below! I had to scroll through history quite a bit to find this gem. 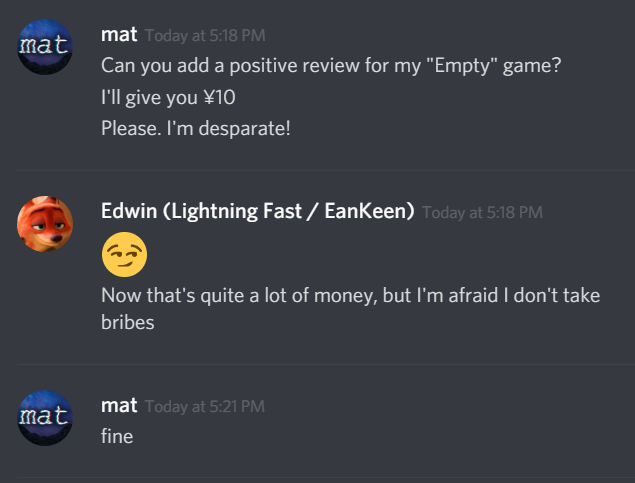 As you can see, Mat wanted to get rid of some Yens by actually offering me some. I am in total disbelief!

First of all, if you want to bribe me, you better bribe me with Francs rather than Yens. They're far more valuable and are performing much stronger!

How did I get so distracted?

Anyways, did Mat's reply imply that he was fine with getting fined? Or was he simply acknowledging that his actions are fineable? I can only conclude from implied intent, so I'll leave it up to @mat1 to clarify this statement.

And I'll say it again - Busted!

Now you people understand why it pains me to look at @mat1's so-called "Empty" "game". There are so many flaws that it's impossible to avoid them all.

You may have one lingering question. If Mat's repl was actually terrible, why would I be creating a sequel? That point is valid. For that reason, I'm not actually naming my project "Empty". I'm going to call it "Full", because it is full of everything that "Empty" failed to offer: purpose, meaning, and peace.

I hope I caused you guys to think a bit more critically about the world around you. I hope I planted a small seed of doubt in your hearts. Maybe it'll grow as you read Mat's frivolous post again.

And one last thing, @a5rocks, @nithilan4, @Mooopy, @leon332157, and @TheDrone7, I urge you to pay back the ¥10 and adjust your reviews accordingly. I understand that you all want to create a quick buck, but bribes are no joke. Please let everyone know why my Full is far better than Mat's Empty.

Wow, I thought the first game had the perfect ending but this... this is serene!

I luv this project :)

The stark contrast between the @mat1 at and @eankeen ‘s versions of Empty are clear, but we are reminded no matter how different they may seem, we are reminded the core message remains the same, the takeaway of life the ups and the downs, the symbolizing blacks. The revolutionary new text that @eankeen has discovered that there are many ways to represent the mysterious meaning.... This is a remarkable breakthrough that brings tears to the eye. However, his offensive comments against the yen is not appreciated.

if this review was helpful please upvote!

nO sTOP u uNORGININAL bOI

As you can see, I'm getting overwhelmingly positive feedback from my fellow brothers and sisters. Even mat1 said is was great (you can really tell from his deeply insightful quote!) And thank you to all of you readers, for being so kind and understanding! PEACE ✌

2 years ago
You are viewing a single comment. View All
eankeen (1407)

@mat1 I'm smh my head also! Can't believe I only mentioned 3 of your mistakes. Probably should have cut you less slack...